The Principle of Individuality: 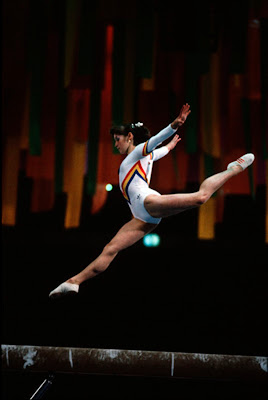 Performance and Malleability of the System or….

Making the most of what you’ve got!

This post is part of a series on the practical application of training principles (see sidebar, 'the core principles')

Those of you keeping up with the Olympics will, no doubt, be aware of the dominance of the Chinese, particularly in the Gymnastics events. Whatever your political views, one cannot argue with the results that come from a state sponsored athletics program. While China’s dominance can, in part, also be attributed to their immense population, one need only look at the success of countries in the former Eastern Bloc, such as Romania (the home country of the gymnast pictured above – Ecaterina Szabo) for a striking example of what can occur when a country makes a concerted effort to ‘make the most of what it’s got’. It is ironic that the socialist states have exemplified the art of embracing (and exploiting) individual differences, while, in the name of equality, the Western world is reluctant to admit that we are all different. We all have different strengths and weaknesses that suit us better to some tasks than others. This is the crux of talent identification programs and, in a larger sense, the principle of individuality.

This post is not going to have the same limiting tone that most blogs that look at genetic determinism in sports portray. The “if you don’t like your performance, then blame your parents” tagline just isn’t as applicable to ultra-distance athletics as it is to some sporting events (as you will see!). However, there are certain physiological peculiarities that leave some individuals better suited to some sports than others. At the extreme example, there are some functional pre-requisites that must be met if an individual is to be World Class in any sport. Many of these are very trainable. Some are not. The intelligent athlete will ultimately select the sports and events that give him/her a ‘fighting chance’.

So, what are the physiological pre-requisites to becoming a World Class Endurance Athlete?


According to studies by Bouchard (1988), a reasonable expectation for VO2max improvement with appropriate training is ~15% (range 3-33% improvement, partially in accordance with training status). Therefore, if you’re a male athlete with an untrained VO2max in the ball park of 3.8 L/min, you’re in the Ironman game. To be frank, based on the testing that we have performed, this isn’t all that rare or special.

For those of you who are yet to get into the lab, for the relatively untrained athlete, 3.8L min corresponds with a starting functional threshold power of ~200W. Good but certainly not exceptional.

Within the first year of aerobic training, the average athlete can expect this value to increase his VO2max ~15%-20% to with appropriate aerobic training mixed with higher intensity intervals (Bouchard, 1990; Klissouris, 1971). This equates to 4.0-4.2L/min or an FT of ~240W

For a relatively untrained individual, it is generally considered reasonable to be able to gain 5-9% Lean Muscle Mass (LMM) within 12-18mths of consistent strength training (Gettman et al. 1979, Misner et al. 1974). This equates to ~0.1-0.3kg/wk. So, your chances of achieving the proper morphotype for your chosen pursuit are substantially greater if your starting LMM is within ~6-10kg of your sports optimal weight.

On the flip-side, while potential for fat loss changes with somatotype, even endomorphs have the potential to become relatively lean. This is both the area of greatest upside for most of us and the area that many of us have the most work to do. In this case, reasonable long term fat loss of 0.08 to 0.25%/wk can be expected (4-10% body fat reduction per year in accordance with starting value and somatotype). With the set-point theory in mind, a sporting event within 5-10% of your ‘normal’ body-fat is suggested. In other words, if your current body fat is 20%, aspiring to be the next Olympic Marathon champ may not be ideal. Aspiring to be an elite Ironman on the other hand….

While relative VO2max is of limited significance to a weight supported activity such as rowing, or even flat road cycling/TTing, as a triathlete, it is important that the athlete strives for both the maximal absolute oxygen uptake (to optimize bike performance) and the highest possible relative number (for hills and run performance). Again, long course relative values are within the reach of most folks, esp when the impact of body composition is taken into account.

However, in addition to the improved physiological efficiency, there are also long term improvements in biomechanical efficiency taking place that can need to be factored into the equation. Improvements of ~4-6 Watts per liter of O2 consumed have been witnessed for cycling (Coyle, 1988,1991). For the Ironman athlete, this can mean a difference of 15-20 Watts for the same energy expenditure. Similarly, elite runners typically exhibit much higher efficiency, than novice runners, and to a lesser extent, triathletes. In fact, with years of running training, athletes can expect to run 5-7% faster for the same energy expenditure by sheer virtue of improved biomechanical efficiency: 15-20s/mile at typical race paces!! (Margaria et al. 1963). Again, providing you have a ticket to the dance (in the case of Ironman, they’re pretty easy to come by)….. miles make champions.

In a cycling sense, for our “champ in the making”, this brings the progression more in line with the following:
Year 1: 240W
Year 3: 270W
Year 5: 293W
Year 7: 307W
Year 9: 320W
5. The 'Back-Up' Battery
Substrate Efficiency: Finally, we come to the big one. While not directly related to LT or FT, it is the prime determinant of your ability to use your aerobic efficiency over long course racing duration.

For example, 2 athletes with a Functional Threshold Power of ~320W, one burns 5kcal/min of fat. The other burns 2kcal/min from fat. The extra 3kcal/min of Carbohydrate that the athlete must use to supplement for their poor fat burning results in athlete A (Mr inefficiency) racing an Ironman at 68% of his functional threshold power (218W), while athlete B is able to race at 80% of his functional threshold power (256W). In terms of “bang for your buck”, this 40 watts is a whole lot easier to come by than the 5 years that it takes to achieve a similar improvement from aerobic training. While all successful Ironman athletes require relatively high aerobic numbers (LT/FTP), not all athletes with high aerobic numbers will be successful Ironman athletes. Substrate oxidation plays a large part in explaining this.

The good news is that, all in all, substrate oxidation is very malleable, esp with diet.
Ravussin et al (1985) observed a change in subjects resting RQ by .05 within a 16 week period by manipulating protein/CHO content of the subjects’ diets. This represents a change in fat oxidation of ~17%. The extent to which this carries over to exercise performance is largely a function of the subjects’ aerobic fitness (Goedecke et al. 2000). Again, aerobic fitness is a necessary ingredient to achieving your potential as a long course athlete, however, alone, it is not enough.
***************

Perhaps the most encouraging aspect of the principle of individuality is that, while we are all born with different handicaps and advantages within the athletic arena, we are also born with widely varying ‘trainability’. Even the most genetically deterministic sports science researchers such as Claude Bouchard are ultimately forced to conclude that attempting to predict the extent that an athlete will adapt to training is futile. Some athletes will improve VO2max by 1.0L or more with 20 weeks of aerobic training, while others will struggle to improve by 0.1L. This can only be partly attributed to the athlete’s starting level. In real world terms, while I have provided an example of the average rate of progression observed in a number of studies as a 9 year process, the reality is, that, while the majority of us will fall under the ‘meat of the curve’, based on the genetic studies to date, some folks can expect to go from untrained to World Class in 3 years, while at the rate that others are progressing (with equal training load) they will simply run out of time. While there may be some clues that we can use (and heed) along the way, when it comes down to it, there is only one way to completely answer the question “How good can I be” – Get out there!
Posted by Alan Couzens at 9:01 AM

Alan, this is precisely why I keep coming back!

But let us not for get the brain that runs the engine, holds the chassis together, fires the drive-train, turns the wheels and determines our fuel efficiency: our belief, our motivation, our heart (so to speak).

I hope that the post comes across as a reflection of all of the things that we can influence as IM athletes.

With all of the latitude that we have to work with in Ironman athletics, in the end, when assessing just how 'malleable' we are as Ironman athletes one must conclude that we are about as malleable as play-dough!! Limited only by the imagination and the commitment to long-term focused crafting by the artist at hand.

So with SMARTHARD work I definitely have a chance to get there!

last time I checked, those were in place :)

I think the only thing missing is the disclaimer that it never gets easier but you will get faster.