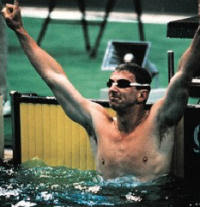 “Duncan Armstrong (1988 Olympic Gold medallist in the 200m Freestyle) had witnessed the ruthless dedication displayed by Jono Sieben in his quest for his Olympic Gold (1984 200m Butterfly). In 12 months of training he did not miss one day, one session.”
- Lawrie Lawrence (coach of multiple Olympic champions)


“Give me 1000 x 6000m swim sessions without missing 1 and I guarantee you an Olympic Berth”
- Brett Sutton
Note: The athlete in question missed his first session after the 500th, his second was 870 session after starting. The day after his 3rd missed session he destroyed the national record and made the Olympic Team.


“The only secret of those of us who were training at Caulfield and Ferny Creek was the consistency of our training. None of us ever missed a day, as a result, we were all improving. Although each of our sessions would physically stretch us, we never finished a day so exhausted that we were not able to train to the same standard the following day.”
- Ron Clarke (19x World Record Holder)

There is a great quote (I think it’s Mark Twain) that comes to mind:

The point, of course, is that sometimes it takes a serious physical or emotional punch in order for us to truly learn, on the deepest level, a simple lesson. This is particularly appropriate to this week’s post because, as you probably read in my last update, I have recently had a week off and a week of very light training following my last crash – lots of time to think (& mope) about lost training.

Of course, we read about the importance of consistency again and again, but for some of us (e.g. me), we don’t truly realize just how important consistency is until we are forced into a period of inconsistent training. I’ll chat about my experiences over the past couple of weeks in a bit, but first a little background reading…

There are a number of studies out there that have demonstrated the immediacy of detraining upon cessation of training. Detraining occurs as quickly as 3 days after training ends and within 1-3 weeks, performance can be expected to drop by 25-30%. If you are unfortunate enough to be forced into a 1-3 month period of no training, expect a loss in performance of 40-50%. For all but elite athletes, this kind of loss will bring most athletes back to pre-training levels (McArdle, Katch and Katch, 1996). When one looks at these numbers, the importance of doing whatever it takes to keep the engine ‘ticking over’ becomes readily apparent.

The mechanisms behind these fitness losses are equally interesting: In just one week of training, athletes can lose 50% of additional mitochondria produced during 5 weeks of training. Once lost, up to 4 weeks of additional training are needed to regain this mitochondria (Olbrecht, 2000). This 4:1 rule is pretty commonly touted among coaches and seems well supported by the literature and my own personal experience, (as I have outlined below).

Similarly, glycogen stores rapidly decrease upon cessation of training, with losses of 40-60% to be expected following 4 weeks of de-training (Wilmore and Costill, 1999). This has direct implications on the athlete’s work tolerance upon resuming training. Even following 1 week of de-training, the athlete will often not reach pre-break training volume until 1 month or more of training resumption.

As mentioned above, my own experiences over the past couple of weeks are tying in well with the literature (I have actually had this blog in the works for a couple of weeks now. I was hopeful that I would be able to show data from my training break through to the return to my normal training/performance levels, but I am afraid, despite my wishes, I am falling in line with what the literature suggests and don’t expect to be back to this level for at least another week!)

My session by session average power and heart rate (from the session before my break through to now) is shown graphically below: 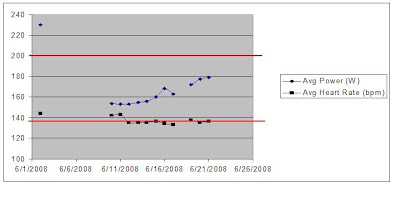 The 2 red lines represent my average training power and heart rate from my last month of training. As you can see, if my average power continues it’s trend, it will be July 1st before I am back to my average power output (201W) for the month of May. In other words, after 1 week off, it is taking me another 3 weeks to just get back to ‘normal’ training levels. This has huge implication for those athletes who have regular 3-7 day breaks in their schedule, e.g. travel for work etc. It is imperative that some level of maintenance training is done even during these relatively short time periods to ensure that the athlete is not continually playing catch up.

For athletes who are forced to take longer periods off due to injury, the importance of maintenance training becomes more pronounced. After reading about just how aggressive Floyd Landis was in his return to training after his hip fracture and comparing it to my own conservative approach (that resulted in being confined to a wheelchair for the better part of 3 months), I realize the importance that elite athletes give to ‘keeping the engine ticking over’.

In the end, as the elite coaches and athletes quoted at the start of this piece have concluded, CONSISTENCY TRUMPS ALL!

"Just wondering what kind of guidelines there are for maintaining one's current fitness level?"

There is good news on this front. Generally, studies show that performance can be maintained (or in the case of tapering, improved) with reductions in training volume of 80-90% of peak seasonal volume for 7-10days of training or 65-80% of peak seasonal volume for longer time periods (up to 4 weeks), providing intensity, particularly intensity in excess of the lactate threshold is maintained at normal levels. (Anderson et al., 1992, Costill et al. 1985, Mujika et al. 1996).
Posted by Alan Couzens at 9:05 AM

Just wondering what kind of guidelines there are for maintaining one's current fitness level?

I like to say that "it's better to be consistently wrong than right once in a while"! And while this isn't entirely accurate, it's at least catchy!

In training, and I speak with experience (mine and otherwise) the secret is that there are no secrets. It's a day in and day out, week in and week out, month in and month out, year in and year out, decade in and decade out process. Simple, really!

Very good and informative post. Had similar thoughts regarding consistency and many aspects of life - including exercise, but did not know about the data actually out there.

A good and informative post. I had similar thoughts about consistency in all aspects of life - including exercise. But I did not know about the data that existed out there to support the premise.

When I get a chance, I'll throw a few points on the post about what science has to say about training levels required to maintain training.

I like your latest blog post. Freezing the credit cards - Nice! Control your environment and you will control your destiny!

"Decade in, decade out".

Excellent post, CV. I think that one's going on my quote wall right alongside Istvan Balyi's quote that it takes 10,000 hrs to become World Class at anything.

For us with a few less decades to spare, it's time to get busy :-)

Yep, as much as I would like to hope that the data is not true, at least in my experience, it seems to confirm.

This couldn't have come at a better...or worse time for me. I'm just coming back from a week off from training due to a bad cold. Still coughing but I'm training today no matter what.

When I read your article I was a bit taken back by this 'no matter what' approach to consistency you seem to be encouraging (specially coming from Gordo's school).

Don't get me wrong I am a big fan of your writting but I just realised I'm yet to see an article on your blog that talks about the importance of recovery (particularly after a serious injury, being sick etc...) as opposed to the importance of training.

I think the way you put it here a lot of people are reading along the lines of 'do something no matter what' and I'm not sure if that's what you were trying to say.

Please don't get me wrong here.

While I guess you could say that I am an advocate of the high volume approach, I'm not an advocate of the 'mindless volume' approach. If for whatever reason, you are unable to maintain your normal training intensity, then you should rest and actively recover until you can.

Thanks for prompting the clarification.

Rog,
I don't speak for Alan, but I believe the gist of what is meant is simply to stay consistent when you CAN. Obviously there are going to be times when you cannot.

That said, there is almost always something you CAN do to further your cause. I know plenty of runners who don't believe they can stay "in shape" when struck by injury and yet when introduced to aqua-jogging or the elliptical trainer or bike riding, they DO indeed keep their fitness rolling, although, perhaps, it may be somewhat unspecific in its relationship to their preferred activity. Bottom line: active recovery almost always trumps inactive recovery, when consistency is the aim, and consistency should always be the aim, as Alan points out.

You can be my wingman any time!

My tri coach, Tony Benson, says that it takes 44 million steps to become a decent runer. It works out to about 35,000km or a 10km run every day for 10 years!

Great quote from somebody with the pedigree to back it up.

I am a big fan of Tony's. "Run with the best" is at the top of my reading list.

What happens if you're unable to train for one of the disciplines? So, a triathlete who is unable to run for a period, but can still ride. How would they be affected?

Short answer is to keep it as specific as possible. As boring and unpopular as it is, aqua running beats cycling by a large margin as a substitute.