As many of you know, Mat, Gordo and I have recently opened a small human performance lab in Boulder. It has been a very interesting experience on many fronts. As a guy who is totally obsessed with numbers, I have been quite surprised at the reaction of a number of quite elite local triathletes when we approached them about testing. The prevailing attitude about VO2max testing still appears to be that VO2max is the ‘end all, be all’ when it comes to endurance athletics. In fact, many athletes are so afraid of discovering what their number (and by extension of logic, their athletic ceiling) is that they have declined the opportunity to get tested and get some very useful information about their current physiological limiters that they can then apply to their training. The VO2max number is just one (and probably the most useless) metric that we obtain from a VO2 test. It is not particularly relevant to ultra-distance athletes, whose VO2 numbers are often quite pedestrian when compared to their short-course counterparts, and, at the risk of offending my fellow exercise scientists out there, to suggest that we only have a maximal 15-20% upside to improving our VO2 max is quite simply bollocks. Even taking body composition and economy improvements into account, I have witnessed numerous clients exhibit improvements in both lab measures and ‘real world numbers’ far in excess of 20%. There is a definite plateau in the stroke volume/oxygen delivery side of the equation. However, the aVO2 side of things, while much slower to improve, is a multi-YEAR adaptation.

But let me dismount from my VO2 high horse for a moment, as I explain some of the other (non-maximal) VO2 metrics that can provide you, as an athlete, with some very useful information on your training zones, your true physiological strengths and weaknesses and where you should best direct your training efforts for the coming year.

Training Zones
VO2 testing is a particularly useful way to determine training zones. It provides the coach and athlete with some additional measures that heart rate and lactate testing do not provide. It also makes the ‘no-mans land’ area between zones easy to identify and eliminate, thus maximizing the desired training effect.

Critical points on the VO2 curves:
Zero Net Energy Utilization (NEU)
The curve immediately below displays the total work being produced at each respective intensity level, along with the relative contributions from fat and carbohydrate for one of our athletes. 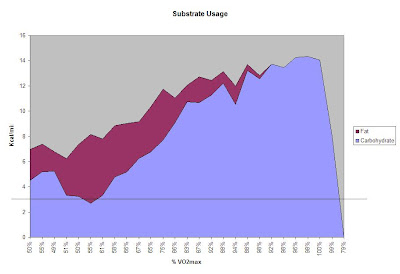 As a very fit athlete, this guy has reached a point where he is able to train at an intensity where he can accumulate work with no net glycogen cost. I.e. he is able to replenish glycogen at the same rate at which he is using it. Several studies have shown that the maximal rate of replenishment under conditions of exercise is approximately 3kcal of Carbohydrate per minute (Jeukendrup and Jentjens, 2000). This threshold is indicated by the horizontal line on the graph. If the athlete can work out at an intensity in which they produce less than ~3kcal minute of work from Carbohydrate metabolism, they are in essence not dipping into their glycogen stores. For the athlete in the figure above, you can see that he accomplishes this. The point where the curve rises above the line corresponded with an intensity of 62% of this athlete’s VO2max. In other words, this athlete can exercise at 62% of their VO2max without inhibiting glycogen recovery from their harder sessions. This is a critical ability because it significantly increases the total amount of work that can be accumulated in a training week. In volume overload periods, this can take the form of training camps or, in the context of the basic week, the athlete at this level can employ low intensity aerobic training while they are recovering from key sessions.

Maximal Level of Fat Oxidation
From VO2 data, we can also determine a specific training intensity that elicits the greatest absolute contribution from fat oxidation. For the Ironman athlete, this is the key adaptation and, in my experience, is the greatest predictor of Ironman success. Frequently, an athlete who is relatively fast in short course racing will be disappointed when they attempt to transition to long course. The reason is simple, long course racing has very different limiters to short course racing. Consider the data below from 2 actual athletes:

One of these athletes has a 9:54 Ironman to his credit. The other is yet to break 13:00. Of course, I wouldn’t be going through all of this building of the suspense if the results were as expected. You guessed it, the 9:54 guy has a VO2max of 41 ml.kg.min. So, what data is missing?
The key data missing is economy & fat oxidation rates. At Athlete B’s “Steady” pace, he is able to produce 5.5kcal/min from fat oxidation. Athlete A is topped out at 4.3 kcal/min. Now, before Athlete B’s ego gets too inflated, it is worth noting that Dr Tim Noakes, in his book Lore of Running, postulates that Mark Allen must have generated 10.5 kcal/min from fat (!) in order to run a 2:40 marathon at the end of an Ironman. He also points out that this value is 50% greater than the highest level that he had recorded in elite 10K and marathon runners in his South African human performance lab. Clearly, it is an understatement to say that this ability deserves a good amount of attention (& training time) for the Ironman athlete, especially considering the ‘upside’ that most of us have in this area.
Ventilatory Threshold 1
A VO2 test is useful not only to monitor this ability, but also to determine the appropriate zones to use to improve it. If you take another look at the chart, you will see that from 50-75% VO2max, there is a good chunk of energy contribution coming from fat oxidation. However, once the athlete goes a tick over 75%, the energy coming from fat oxidation disappears rapidly. oxidation. It is very useful, as an Ironman athlete to be able to pinpoint this spot in setting your training zones. There are many ways to approximate this, e.g. the Maffetone method etc, but it is worth noting that, in my experience, there is more individual variation here than even with maximal heart rate and the best way to see that important breakpoint at the cellular level is with individual VO2 testing.

Ventilatory Threshold 2/"Lactate Threshold"
On a VE curve, you will typically see 2 clear deflection points, where VE and VCO2 both increase in a non-linear fashion, i.e. there is a jump in Ventilation (the blue line) and VCO2 (the purple line) that is noticeably greater than the preceding steps. The first of these (VT1 on the curve below) is related to the metabolic shift from fat to carbohydrate oxidation noted above (McLellan and Skinner, 1980). The second of these is caused by the rapid accumulation of lactate in the blood once the athlete passes the lactate balance point and the consequent rise in ventilation elicited in an effort to expel the additional CO2 created from the dissociation of lactate. On a normal individual, this point (VT2) will correspond exactly with LT2, or the onset of blood lactate accumulation (OBLA). 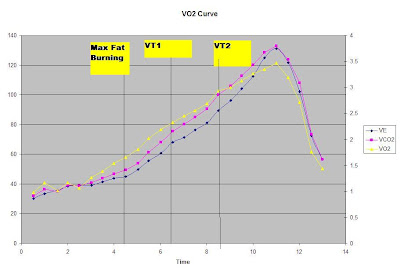 This value is also of use to us as athletes because it represents another distinct limiter to the amount of volume that we can tolerate in a training session and over the course of a week. Even small excursions above the VT2 line correspond with a very high recovery cost (due to the shift in fibers used) and for the long course athlete very little performance benefit.

VO2max
Of course, the final point of interest is the point of VO2 max, which, coincidentally, corresponds with the max value of the VO2 curve (providing this point fulfils certain criteria). For the long course athlete, the VO2max has very limited predictive value, &, consequently demands limited attention to its improvement. Even a 2:40 marathon requires only a VO2 of 53ml/kg/min. For most well trained individuals, this maximal value is not going to be limiting. Going back to our Athlete B, despite his relatively low maximal value, he was able to run 3:22 for an Ironman Marathon (67% of his VO2max). This value corresponds with Dr. Noakes’ estimates for Mark Allen’s optimal Ironman marathon (i.e. 66% VO2max) IMHO, until you are approaching these relative values, a focus on raising your maximal value is not appropriate.

In part II, I will get more into the nitty gritty of actual values for different athletes and the consequent training implications.

If you are interested in having a VO2 test performed and interpreted by our team, drop me a line at alan@endurancecorner.com
Posted by Alan Couzens at 3:14 PM

Another very informative article. Well explained. Having put similar data to the test on myself over the past two years, I can say that I have seen what I consider to be substantial gains in my ironman fitness.

I have had a physiological test performed annually for the past two years (and have a third coming up in a month), and have found the data very useful for not only tracking my progress, but also for setting up my training. If you would be interested in seeing the data, I am happy to share it with you. Drop me a email if you are interested (lee dot gardner at yahoo dot com)

I need your help. I have around 6-10 guys thatI'm coaching for free as a result of me just wanting to share information with those that I train with.

This article you wrote is awesome. However, unfortunately, I don't have acess to any of that sort of testing.

How would someone like myself how only has a heart rate monitor and a few years of experience set up my zones accurately??

How could I help other set up their training zones without available trsting??

Any advice will be much appreciated??

Bit of a tough question. Obviously, lab measures offer the most accuracy.

Next best bet would be to secure a Lactate Pro portable analyzer. At $300 or so, probably one of the best all-around investments for a serious athlete.

Short of that, the best 'surface indicator' of what's happening metabolically at any one point would be ventilation. A couple of markers:

AeT - onset of quiet rhythmic breathing through your mouth.

A very self-aware athlete will be able to pinpoint all 3 points with practice. For you, as a coach VT1 and VT2 will be the most noticeable. If you start with those 2 points and subtract ~10bpm for VT1 and tell the athlete to tune in for the sensation of AeT at that point, you should be able to dial in your 3 markers that define

Curious as to how the Fat and Carbohydrate utilization are measured during the test.