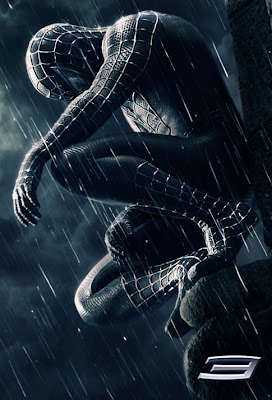 Those who have seen Spiderman 3 will be familiar with the introduction of the black spiderman. This villain entered the movie as the antithesis to the regular Spiderman (which was, IMHO, a pretty darn cool concept). He was the opposite in every way to red spidey.

Seeing Spiderman 3 got me thinking as to who my antithesis in life might be. That’s a tough question, considering how far from the norm I fall on many fronts, but at least from a physiological perspective, EC’s own, Mat Steinmetz has to come close.

Mat and I recently did bike FUEL tests here at the EC lab in Boulder. We both put out some pretty good #’s but in very different ways (see charts below). 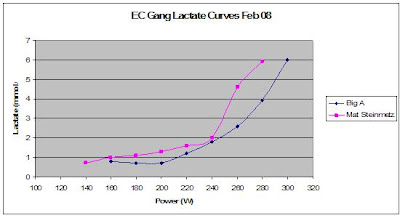 Of course, I’m going to throw up the chart that gives me the upper hand first :-) If we define AeT as the workload that elicits the first material uptick in the lactate curve, for me this occurs at 220W. For Mr Stein, while a little harder to see from the curve, if we pull in his baseline and w/up data it is clear that the 160W stage is the first indication of rising lactate.

If we define the lactate threshold values as 1mmol/L above baseline, Mat’s Lactate Threshold occurs at 220W, while mine occurs at 240W (at this point the curves, and our relative abilities at this physiological point come much closer together).

Finally, the onset of blood lactate accumulation (OBLA), defined by either the modified Dmax method or the workload the first elicits a 1mmol/L jump in lactate occurs for Mat at 260W, and for me at 280W.

While, if looking at these numbers in isolation, one may expect that I would have the upper hand, in real world long course racing this doesn’t (at this point in time) bear out. A reason for that may be found if we compare our relative substrate profiles from the same test: 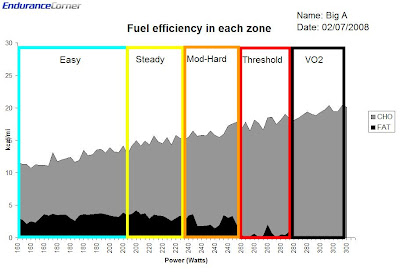 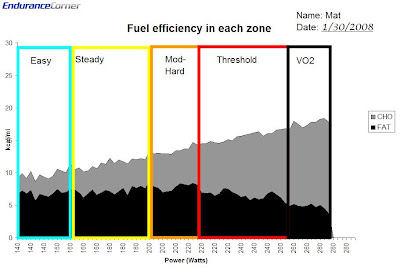 The black area of the chart illustrates the relative contribution of fat oxidation to overall caloric output at each respective intensity. It’s pretty clear to see from the charts who’s going to run out of fuel sooner (even at relatively high power outputs).

So, it looks like the score is 1-1 and the battle of Big A and Mighty M continues.

However, Mat is not the real villain in this epic battle. Nope, the villain here is much more sneaky, dangerous and a master of using the dark arts to draw me under his spell: 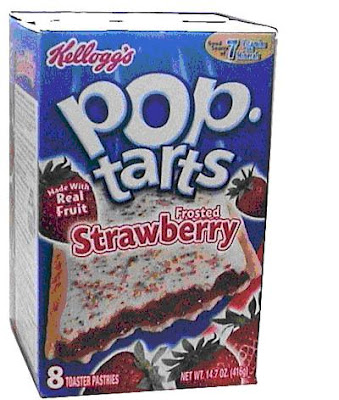 OK, so here’s my personal rationale….. As an endurance athlete training 15-20hrs per week, I’m going to be taking in 500-700g/CHO per day. Most of this CHO will (should) be in the form of sports nutrition products. This equates to (ball park) an extra 2400kcal/day I need to buy just to keep the motor running. Now, I can buy the premium stuff (Clif Bars etc) for ~5c/kcal or I can pump the low octane budget stuff for ~ about ¼ c/kcal. Let’s not kid ourselves, with all of the vitamin and mineral additives, added protein, blah blah blah, what our body really needs at the end of the workout is quick, easily digestable sugar. I can get the rest of that stuff in better (more natural), more appropriate forms throughout the day.

So, that’s the sensible rationale for throwing my 6 boxes of Pop-Tarts in the shopping trolley each week, now for the reality of what actually happens. If my Pop-Tarts do not make an immediate exit to the garage after unpacking the groceries (to where all of the other ‘sports nutrition products’ go), they get placed in easy view in the pantry and fall into this ‘no-mans land’. Is it a breakfast product? Is it a snack food? Is it a replenishment food after a long, hard session. Unfortunately, for some reason, if it doesn’t have “sports nutrition product” printed on it, my mind is completely unable to make the distinction and it becomes all of the above. I think the one Pop Tart identity that has most led to my substrate demise has been the ‘breakfast food’. Over recent weeks, I have been known to slam a Pop tart or 2 before a ride. My body is smart enough to know that if I’m going to throw that much fuel into my blood stream before a workout, it’s sure as heck not going to bother liberating a bunch of FFA’s when it doesn’t need them. Long story short, my body gets even better at burning carbs and worse at burning fat despite an increased training load.

So, that is my diabolical plan over the next little bit – get sugar out of the house. Matty Steinmetz, you may have won this battle but you’ll never win the war mwaaahaaaahaaaa…
Posted by Alan Couzens at 4:03 PM

Pop Tarts?! You'd fit right in on the Pacific Crest Trail Alan! Be sure to read Good Calories/Bad Calories by Gary Taubes when you get the chance. You probably already have an idea of where Pop Tarts fall. I didn't even know they count as calories! It just goes to show you learn something new everyday.

As for the charts, they're great, but the real question is who'd win in a cage fight? My money is on the big guy. No offense Mat! I hope to see you guys in Solvang. It's close to 80 degrees today.

Thanks for the book recommendation. I'm re-reading the Paleo Diet for Athletes right now (I guess it didn't sink in the first time).

Looking forward to coming out to Solvang. Your last blog got me chomping at the bit.

A long post to secretly tell us that you are a junk food addict. *shame shame shame* :)

It's a toss up:
- Strawberry Milkshake
- Choc chip cookie dough.

I mean, they used to be my favorites :-)

You are bad man.

BTW... does Matt's substrate profile lead one to believe that he's been eating nothing but t-bone steaks and pork rinds? :)

To tell you the truth, I'm not in much of a position to answer. Despite working with the guy, I rarely see him eating (which may say something in itself). He assures me he pounds the kcals but I don't see it.

I know when he does eat that he steers clear of sports nutrition. His sugar intake is probably 1/3 of mine.

In light of the results, I'll be paying more attention to what he's eating in the future.

Hydrogenated oils and zero nutritional value. Immune system function requires more than sugar. If we want to get the most out of our bodies then we need to run on premium fuel (and that's not sport nutrition).

Nutrition is one reason why most struggle to out-train me.

I should add that I did enjoy the article -- out of the crew, Black Spiderman eats most like Monica and me.

I'm making an effort to save the sugar for after training.

Will be interesting to see what it does to my profile next time around.

Would the length of time that the both of you have been training for influence how good you are at burning fat?

Would, the ability to burn fat, w be a long slow adaptation the body makes??

Has Matt been training much longer then you?

Paul
P.S hope you don't mind all the questions.

That's one of the funny things about all this.

I've been doing tri's since 1998, and always with a preference for relatively high volume. Prior to tri's, I was a distance swimmer. Mat is a relatively young guy who's been doing tris for a short period of time (about 4 years??, Mat correct me if I'm wrong) and his high school/college sport was the, very anaerobic, basketball.

In short, in training, one would think that I have done all of the right things to be a good fat burner. This, in part, is what has prompted me to look elsewhere to improve this aspect of my physiology.

Great article. I hear ya on the tarts. I used to have one or two strawberry pop tarts every day. I justified it (and other "bad" stuff) with big training. I'm beginning to learn that it really isn't calories in calories out. The results of your tests are a great example of that.

update from tucson... billy the kid eats pop tarts too!!! so you are in good company... also got the chance to hang with a top NA IM'r... the dude doesn't eat much protein or fat... nothing but white rice... and still can crush it.

I dropped you an email..but seems this is a better place to catch you!

How difficult is it to get one of those substrate profiles done? I'm based in Sydney AUS. Is it just a matter of a regular VO2max test with the appropriate interpretation of results?

I'd love to fly to Boulder, but that would make one heluva expensive test!

Sorry for the delay in getting back to you. Currently doing a bike camp with Robbie Ventura in Cali.

Generally not an issue to get a university lab to run your protocol. You just need a high end met-cart. If you want me to analyse and interpret the results, I can do that for a consult fee of $150.

Let me know if you're interested and I'll fwd you the protocol.

No problem with the delay.

You'll have an email from me (via the blog). When you are back, drop me the protocol and we can discuss. More than happy to have you look at it once the testing is done.