Two tickets to the Gun Show


The video above is from one of my favourite movies, Anchorman. This week’s blog entry is about morphological characteristics of elite Ironman triathletes, or more specifically, how big are their guns? I guess in reality, I’m more interested in the correlation between things like thigh girth, muscle cross sectional area and performance, but I’ll take any excuse to throw a Will Ferrel reference in there J

One of my own personal struggles as a triathlete is with the issue of bodyweight. At various points in my athletic career, my pre-occupation with my bodyweight has bordered on dysfunctional. The issue is not helped by the obvious reinforcement that comes from running my fastest marathon ever, which was ~20 minutes faster than my next fastest marathon, at 158lbs. For my 6’4” frame, you can imagine I was pretty skinny. In fact, all of the times in my past that I would consider I was running relatively fast have been at a low bodyweight (158-165lbs). I always assumed this relationship to be causative. Now, I’m not so sure.

The crew (Mat, JD) and I just returned from Endurance Corner’s inaugural spring training camp in Tucson, AZ. The camp was a great experience all around, great training, great people, great environment. For myself, one of the highlights of camp was a discussion that I had with Jonas Colting (World Champion and 2x Ultraman Champion). Jonas was great to be around for a couple of reasons. Number 1, he is a great archetype for the sort of athlete I could become. He is a big, strong dude, and a great runner to boot (that’s him in the yellow crocs below) 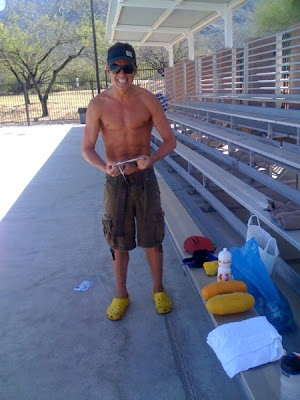 #2: He is one of those athletes with a no-limits attitude. It can become easy for athletes with egocentric personalities to buy into the “I guess I was born to be a gifted athlete.” This is particularly true when anyone with a rudimentary understanding of exercise physiology is familiar with the work of Daniels, Yarbough & crew, who ultimately came to the conclusion that the gold standard of aerobic performance (VO2max) is largely genetically determined. In my mind, I am yet to see a study with sufficient duration that has led me to conclusively agree with this. Perhaps my own bias is coming into play here. If so, I’m fine with that I’d much rather adopt a self serving inaccurate belief than a self-defeating accurate belief any day of the week.

Anyhow, back to the convo with Big J….

It was Jonas’ take that muscular demand for O2, i.e. having bigger oxidative fibers, can be a potent stimulus for VO2max improvement. This was interesting to me for a couple of reasons - #1, I was re-reading Noakes ‘Lore of Running’ on the car trip down and he comes to a similar conclusion:

“The high rate of Oxygen delivery to those skeletal muscles, which is needed to sustain their function during maximal exercise is the result, not the cause of an athlete’s superior exercise capacity.”

#2 I had largely discounted those bigger athletes who do well at endurance sports as genetic freaks, e.g. Big Mig with his 7.04 L/min VO2max. Sure he goes up hill pretty quick, but for us mere mortals without his engine, if we want to go uphill quickly or we want to run quickly and we’re lacking a couple of L/min of absolute VO2max, the only way we are going to improve our relative VO2max is to shed some pounds. As Noakes’ perspective above suggests, this may not be the case.

The last VO2max test that I did resulted in a max oxygen uptake of 4.5 L/min. Decent, but certainly not elite by any stretch of the imagination. If we accept the traditional view on VO2max that claims that the best I can hope for is a 5-15% improvement in my ‘engine size’, it is pretty clear that I have a much better shot at long term improvement by making my modifying my chassis and making it more efficient than spending a lot of energy eeking out the last 5% from my engine. However, if we adopt the alternative approach that ST/FOG fiber demand for O2 is a potent stimulus for VO2max improvement, hypertrophy of these fibers becomes a viable objective.

This perspective does have some scientific support, particularly in the European Exercise Phys literature. Berbalk has done a number of studies looking at training load, fiber size and cardiac adaptations and has shown a definitive link between the 3 among endurance athletes. Is it causative? Maybe yes, maybe no, but at least in my mind it makes enough intuitive sense to be worthy of further exploration and I’m not going to wait around on the lab rats to do the exploration for me!!

So, what is the ideal endurance athlete muscle make-up? 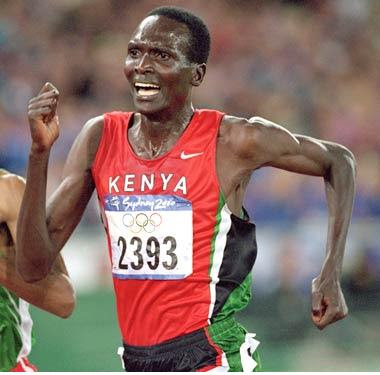 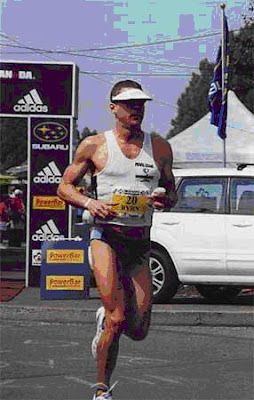 And the numbers? Gordo was kind enough to forward some recent anthropometric data from his Snowfarm stay in NZ. Compare the numbers below to some data that I have from elite Australian distance runners at the A.I.S (mean values, n=18) and my own measurements

A couple of observations jump out when comparing G with similarly elite distance runners:

1. He is heavier. Even when corrected for height, G is carrying an extra 1.1 grams for every cm of height.
2. While heavier, the extra weight is made up of fat-free mass (bone and muscle) as he is similarly lean to the elite distance runners.
3. He has a larger frame than the elite distance runners (at least if we take biepicondylar femur breadth to be representative of bone widths through the skeletal frame)
4. He has greater calf girth than the distance runners. As previously mentioned, this is largely independent of calf skinfolds and is primarily indicative of greater cross-sectional muscle fiber area in the lower leg musculature. A theoretical basis for why this might be the case is given in point b above.

When comparing G’s data with my own, the observations do more than jump out, they leap from the page and punch me square between the eyes. In fairness to Gordo, I must point out that the same conclusions that I am forced to draw from the data are exactly what he has been telling me for some time now. Ditto Matty Stein for that matter, but as Tidwell from Jerry Maguire sort of said, whenever I am confronted with an assertion made without empirical data my gut response is “show me the numbers!!” Well, there they are. It will be interesting to see what I do with them.
Posted by Alan Couzens at 6:38 PM

Could it be possible that you were just more fit when you ran your fastest marathon?

I think your analysis is dead on.

Good piece..I really appreciate the information. I found this article http://faculty.css.edu/tboone2/asep/LimitationsMaximumOxygenConsumption.html searching for more information after reading your piece. I am sure you already know most of it, but you may still find value in it.

Definitely. I guess that's the point to some extent.

It's often difficult as athletes to tease out the variables that contribute to a 'breakthrough performance'. For me, when I get into 'run mode', I increase my mileage and decrease my weight. I think it is fair to say that I probably attributed more value to the latter variable than it's truly worth.

Optimal body comp is a more complex & individual issue than most folks acknowledge.

Enjoyed the article. What are the implications of this for skinny athletes? I am 185cm tall and 67.3kg. Unsurprisingly, I am a strong runner but not such a strong cyclist. Should I be trying to increase my muscle mass through strength endurance work, weights etc? Also, what are the different implications for Ironman and ITU athletes. Many of the ITU guys have similar height/weight ratios to me. Sorry, quite a few questions. Cheers, Mark

Enjoyed the article. What are the implications of this for skinny athletes? I am 185cm tall and 67.3kg. Unsurprisingly perhaps, I am a strong runner but not such a strong cyclist. Should I be trying to increase my muscle mass through strength endurance work, weights etc? Also, what are the different implications for Ironman and ITU athletes. Many of the ITU guys have similar height/weight ratios to me don't they? Sorry, quite a few questions. Cheers, Mark

Considering the relatively greater importance of running in a draft-legal event, ITU is definitely a different beast.

I would say that the question of whether you should get stronger comes back to the old adage of race your strengths, train your weaknesses. The relative improvement over time will be greater if you are attacking a point that is weak rather than one that is already a strength. Of course, there are constraining genetic factors but IMHO, most folks over play these as an excuse to keep working at what they are good at and what they enjoy doing (myself included). See you at the gym :-)