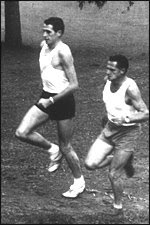 Lydiard is the guy on the right in the pic above. Much of Lydiard’s training theory consisted of going easier (and longer) in the short term so that you can go harder and faster in the long term.

There are few questions related to training that elicit as much confusion as the two antipolar inquiries:

Sports science has done just as much to add to the confusion as it has to definitively answer either of these questions. In this post, I want to present the primary considerations (from my perspective) that each individual athlete must contemplate in order to arrive at an informed answer to these two questions.

Several studies have investigated the minimal training intensity necessary to stimulate an improvement in VO2max in both de-conditioned and conditioned subjects, e.g. Hollman and Venrath (1963), Karvonen et al (1957), or more recently, Swain and Franklin (2002). While the definition of “conditioned subjects” in these studies probably doesn’t extend to the level of conditioning of you guys & gals, the overall trend is still significant. Basically, these researchers concluded that the level of intensity necessary to elicit an improvement in VO2max was correlated to the starting fitness level of the subject. Generally speaking, the range was 30-60% of VO2max (~50-70% of maximum heart rate) for individuals with VO2max values ranging from 30-45ml/kg/min – average values for healthy college aged males and females. Considering most of you are (hopefully) fitter than your average college freshman (‘freshman 15’ included :-), we can assume that ~70% max heart rate is the minimal threshold necessary for improvements in your cardiovascular system.

These numbers tie in nicely with the findings of one of the forefathers of exercise physiology, Per Olaf Astrand, when he investigated the exercise intensity necessary to elicit maximal stroke volume of the heart during activity. This concept is analogous to utilizing a load that will recruit the maximal number of muscle fibers when hitting the bench press without regard for the speed at which the load is lifted. Beyond a certain point, the heart is contracting as ‘strongly’ as it is able. Any further demands in Cardiac output are met by increasing the heart rate rather than increasing the force with which the heart contracts. In a similar way that the absolute load of the bench press is fundamentally more physiologically significant than the speed that you lift it, most of the cardiovascular benefit of aerobic training is reached once this maximal stroke volume is achieved.

Recently, studies have shown that the point at which this occurs is not a uniform 40% VO2max as Astrand suggested, but is rather a function of the individual’s fitness, with elite athletes exhibiting no plateau in stroke volume up to, and in some cases, beyond the anaerobic threshold (Gledhill et al. 1994). So, for the fitness range encompassing recreational athletes to elites, from a cardiovascular standpoint, the minimal intensity required to elicit improvements in VO2max can range from heart rates of ~70% max heart rate for folks of similar fitness levels to healthy college age subjects up to ~90% max heart rate in the case of elite athletes. This has important implications on the level of athlete that ‘needs’ speedwork, but that sounds like a topic for another blog.


So, to improve our cardiovascular indices of fitness, the minimal required intensity can range anywhere between 50 and 90% of the individual’s maximal heart rate depending on their relative fitness. Now, what of our metabolic fitness? We know that in competitions that last longer than 60-90 minutes that glycogen depletion can be a limiting factor. We also know that athletes who oxidize a greater amount of energy from fatty acids as opposed to Carbohydrate for a given workload are able to ‘spare’ their carbohydrate stores and last longer before being forced to slow down. We also know that from a training perspective, using less Carbohydrate at rest and during recovery activity enables us to recover more quickly and thus accumulate more work at sport specific intensities. Clearly, improving our ability to oxidize fat is an objective that is at least as important as improving our mechanisms for Oxygen delivery.

So, what is the minimal intensity required to meet this objective?

The chart above illustrates the fat oxidation trends of two individuals, one fit male with a VO2max of 56ml/kg/min and one deconditioned female with a VO2max of 33ml/kg/min. The y axis of the chart represents the total fat burned per minute, while the x axis represents intensity via heart rate. Clearly, the range at which the male and female are burning the most fat is quite different (and quite narrow). For the female, the heart rates that elicit her highest fat oxidation rates are 102-122bpm, or 55-66% of her maximal heart rate. For the male, the 133-156bpm represents 73-86% of his maximum heart rate. Therefore, the training zone that maximally trains the ability to burn fat will be markedly different for both subjects. This is one of the reasons that training systems based on a % of any given point (maximal heart rate, HRR, FT etc) are pretty useless. They do not account for the huge inter-individual variability that we see in the real world. It is also worth noting just how narrow these bands are. In the male’s case, there is very little stimulus for fat oxidation occurring below a heart rate of 130bpm and after 156bpm, fat oxidation falls off the proverbial cliff.

So, again it seems that the question of how easy is too easy (in a sense of improving metabolic fitness) is also strongly related to the individual’s starting fitness level, which I want to point out is not always indicated by their fitness in a VO2max sense. We have witnessed very ‘VO2max fit’ individuals with very poor substrate profiles and vice versa. Generally, though, I would feel confident saying that the minimal intensity necessary to elicit an improvement in fat oxidation ranges from 50-80% of max heart rate. This is backed up by a great study by Gonzalez-Haro et al (2007) that found that maximal lipolytic power was found anywhere from 33-75% VO2max in accordance with the individual’s fitness.

The trick, of course, for you as an athlete, is to discover your own ‘sweet spot’ for both 'max fat-burning' and 'max fitness' zones. Using non-customized formulae such as the MAF formula or % of Heart Rate Reserve is honestly nothing better than a blindfolded stab in the dark. The only way for you to really know ‘how easy is too easy’ and ‘how hard is too hard’ to stimulate your desired training adaptations is to test, test, test.
Posted by Alan Couzens at 4:12 PM

Is there any correlation between fat utilization and lactate curve?

Because I know where I can have a lactate test done, but nowhere nearby for the full test you guys at endurance corener do.

Reality is most of us do not have access to the type of test you guys at Endurance Corner do. And even if we did, the results will constantly change as we get fitter (as per your article) so unless you have unlimited triathlon budget how do you keep up with these variants?

We need to think of an alternative way... Trial and error maybe?

The correlation is there, but it's not a great one.

Generally in well-trained athletes the fat oxidation zone will lie between La(min), i.e. the minimal lactate value of the test and the ILT (individual lactate threshold).

However, in very well trained Ironman athletes, we have witnessed fat oxidation continue beyond the ILT almost to the MLSS.

Similarly, in poorly trained individuals, we have seen max fat oxidation occur before the AeT.

Wish I had a better answer, but have to keep it real,

'Trial and error' certainly has a role to play.

When we get down to it, why, as athletes do we want to burn more fat?

b) So that we can accumulate more (appropriate) training volume

These two metrics are great indicators of improvement. However, that big caveat of making sure that the volume that we do accumulate is appropriate to our physiological goals certainly makes an initial test to 'put us in the ballpark' seem prudent from a time efficiency standpoint.

By all means, you could bust out a Lydiard and spend the next decade of your life devoted to determining the appropriate training volume and intensity via trial and error or you could use these technological tools to accelerate that process :-)