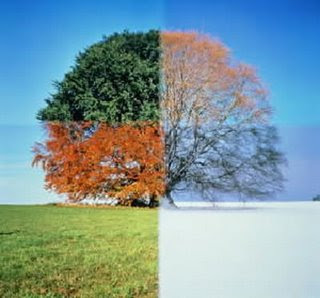 In my last blog, I gave some perspective to the relative merits of adopting a periodized structure when planning a mesocycle. I concluded that while there is benefit to using a ‘staircase’ structure in planning the weeks within a given training month, in general, the practical limitations of a fixed work schedule and life schedule outweigh the potential 3-5% that can come from using this structure.

So, what about the training season (macrocycle)? Should we adopt a flat loading pattern, where all weeks are the same or are there key points within the season that should have a higher or lower volume than the athlete’s basic week?

In my last blog, I hinted that there may be some substantial benefit for the serious working athlete to be had by utilizing appropriately placed training camps that focus on aerobic volume overload within the training season.

Additionally, it is commonly known that a short period of reduced volume prior to the peak competition for the season provides a better performance than continuing a constant load through to the competition.

Let’s begin by taking a look at the use of training camps. Many working athletes will have the choice of spending a portion of their vacation time on a training camp for the 09 season. How much extra benefit can you expect from inserting an ‘overload’ block and where is the best place to put it?

I selected a 5 month macrocycle because it has been shown to be the optimal macrocycle length (prior to unloading and beginning the next cycle) for an average, intermediate athlete (T1=45, T2=15, k1=1, k2=2) (Morton, 1997). This should be adjusted in accordance with the fitness of the athlete, the fitter the athlete, the longer the season, with novices best served with seasons of 3-4 mo duration and elite athletes best served with seasons of 5-7mo. Of course, this at least to some extent runs counter to the desire to peak many times each year in professional athletics. In these situations, an intelligent compromise must be reached.

So, without further ado, let’s take a look at how a training season with 1 x 2 week training camp during which volume is overloaded compares to a flat year-long “basic week” 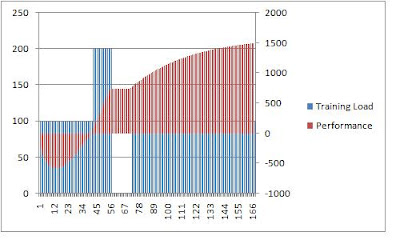 Same average training load (100 TSS/d) but distributing it with a 200 TSS per day training camp during the second month offers a 5% advantage over flat loading (1519 vs. 1448 units). In other words, a similar advantage to inserting a big week every 4th week of 160TSS per day every in a step loading format but without the stress of trying to do a relatively big week and keep your job and family together at the same time. If you’re going to hit it, get away from your job and family, let us take care of the food and the laundry and just spend a couple of weeks this year focusing on nothing but training with us in sunny Tucson.

So, you may be asking, is the placement of the training camp all that important in the grand scheme of things. Answer: Yes!

I tested a couple of alternative placements for the 200 TSS/d training camp. Results compared to a flat loading 100 TSS/d macrocycle are shown below: 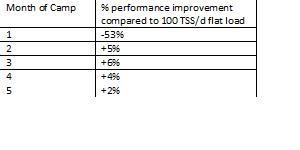 In short, hitting it hard right out of the blocks after a full off-season is a bad idea. If you survive it, you will create a big hole for yourself that will likely take you half a year to climb out of. The first month of training is stressful, irrespective of how easy you take it. It is common practice for swim teams to perform a month of ‘singles’ prior to resuming ‘two-a-days’. Despite this strategy, the return month to training is typically the most tiring.

The best place to insert a camp for the average athlete is month 2 or 3 of the cycle. This is not a revelation by any means. The ‘hell week’ of most swim training programs typically occurs in the third month of training. Likewise, February-March high volume training camps are common practice for professional cycling teams.

Additionally, sports scientists have been aware of this phenomena for some time. Former GDR sports scientist and one of the leading authorities in periodization, Ekkart Arbeit describes the phenomena by using a modified figure of Selye’s adaptation process: 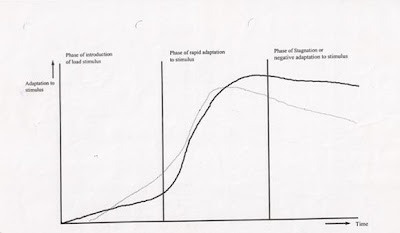 When an organism is exposed to any new stimulus, the first response is alarm. At this point the organism is most vulnerable. After continued exposure to the stimulus, the organism develops resistance or, in other words, enters a phase of adaptation. This is THE CRITICAL PERIOD where the athlete can expect the most (fitness) bang for their (training) buck. This model is applicable across all athletic cycles and is the reason that training load employed in late puberty is so important to the athlete’s long term development (Balyi, 1999). In the case of the training year, load applied in the late preparatory period occurs in the ‘sweet spot’ of this curve and is, therefore, most significant.

Another diversion from the basic week that gives the athlete the most performance improvement is the inclusion of a period of reduced training during the taper period. I have touched on this before so will only briefly revisit it in this post. But basically, the model indicates a 5-7% performance improvement using common taper strategies e.g. 50% average volume reduction in the 30 days prior to competition. This is supported by research by Mujika et al. (1996) who came up with similar numbers in a study on elite swimmers.

Finally, as I highlighted in my off-season blog, the other situation in which a diversion from the basic week is recommended would be for a period of 4-6 weeks at the end of the season.

In summary, intelligent athletes can expect a 7%-13% performance improvement by planning appropriate diversions from the basic week. In particular, early-mid season training camps and pre-competitive tapering are indicated.

If you want a great training camp to kick off your 2009 season click here. Note: The camp is filling fast (that’s not a gimmick. It really is :-)

A living example here on how important the timing and pre-planning of the training camp is! In the past two years I have gone to a two-week early-mid spring training camp from the middle of finnish winter and have done a solo "epic" camp going from 15-20h weeks to 2x 35-40h. No wonder I have been stuggling big time during race-seasons with injuries, illness, energy, hormone levels etc.! So in short you really should be already somewhat fit to handle the load and benefit from a training camp!

BTW how did your aquarobics go? you haven't reported on that yet ;P

Yep. An athlete at your level needs a longer preparatory period prior to hitting a load peak. Novices can get away with it. In a lot of ways they're not fit enough to really tire themselves out.

The more elite the athlete, the more gentle you have to be in the early stages of the season.

Dude, I am the king of the aquarobics class. I'm thinking about giving up the tri thing and going pro :-)

Seriously, I'm really enjoying it and slowly but surely, my flexibility is improving. With any luck I'll get my frontal area under half a meter^2 in 09 :-)

I just found your blog a couple weeks ago and I'm loving it! I just wanted to request that you provide an option for me to subscribe to your blog using a reader (feedburner.com is what I use).

Your request for a feed currently exceeds the limits of my technical savvy :-) If you can point me in the write direction, I'd be more than happy to add it to the blog.