The Wisdom of Johan Bruyneel 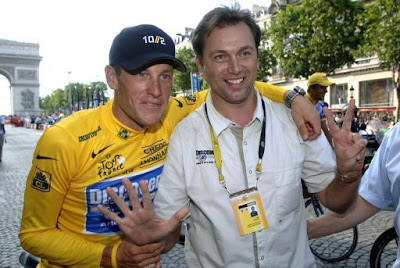 The book, ‘We might as well win’, authored by the mastermind behind Lance’s 8 (and possibly more :-) TdF victories, Mr Johan Bruyneel, made it to my reading list this week. The book is a (necessary) departure from my regular reading list of ex phys journals and texts that can sometimes leave me forgetting the cold hard truth that knowledge is nothing without action and, that the most important knowledge is the one which inspires action. On this front, Bruyneel’s book has so many gems that, as much for my own benefit as anyone else’s, I felt the need to summarize some of them for the sake of posterity.

The title of the book, we might as well win, is also the first lesson. Bruyneel explains it as follows:

“…if you’re going to try something, if you’re going to expend that first block of effort and energy to participate – whether it’s riding the Tour, applying for a new job or coaching your daughter’s soccer team – you might as well go ahead and do whatever it takes to win (whatever ‘winning’ means to you). I mean, I’m going to be there no matter what, right? Why not go ahead and get the victory?”

A twist on the old theme of, if a job’s worth doing….

In a lot of ways, we are a society that emphasizes participation above excellence. I am not sure if it is an extension of the tall poppy syndrome, or a genuine societal humility, but we habitually understate our ambition (and potential) to be great in those fields that we are the most passionate about in order to remain good in all of the fields that fulfill societal expectations. I am here to remind you that there is nothing wrong or anti-social about making the commitment to identify your true passion/s and commit to them 100%.

Passion is a great starting point, but as Johan points out, our moments of true magic occur when we equally utilize our heads and our hearts in pursuit of a goal.
He provides the example of his stage win in the 1995 Tour De France and how, despite possessing a physiology that was inferior to a good portion of the peloton, he was able to ride off the front of the pack on that fateful day via a combination of 100% belief and a superior, almost obsessive attention to detail that few choose to possess.

Our true power as Human Beings is so much greater than our physiology. In fact, compared to our mammalian brothers and sisters, physiologically, even the best of us are kind of the runts of the litter and yet, from an evolutionary perspective, we were able to overcome much stronger competitors via our mental faculties. The same is true in sports.

As a sports scientist, my greatest source of frustration comes from seeing athletes with unquestionable physical strengths fail to address their weaknesses. Even at the elite level, most athletes are far too proud of accomplishing things ‘their way’ to consider the possibility that to move to the next level they may need to try another way.

Like making hard decisions (see below), thinking - analytical, unbiased, completely open thinking is real work and it demands a maturity that few possess. That is why most folks are unable to do it. However, being one of the few athletes who not only takes the time to continually get information, but also act on it, will enable you to evolve beyond those who rely solely on the innate strengths of their physiology.

3. Don’t be afraid to leave a few dents.
Johan talks about some of the hard decisions that he has had to make in order to lead a Tour winning team. Decisions that while not popular, were always right (in alignment with his personal mission).

The harsh reality is that, in this world, there are some very strong willed folks with very strong personal agendas that we bump against on a daily basis. It is also often true that if you are not diligently heading toward your own goal, you generally wind up supporting someone else’s.

Making hard decisions is…well…hard. That’s why many folk avoid doing so at all costs. I know that in my own life, in order to continue to follow my passion, I have sacrificed a marriage, 3 well paid jobs, being geographically close to my family, not to mention the numerous little sacrifices that happen every day. and, despite these necessary dents, I don’t regret a single one of these decisions. Life is about enjoying the ride, not arriving at the end-point in pristine condition. A few dents are inevitable!

We all remember Lance’s toughest hour on a bike, as he slowly ascended the Joux Plane and fought valiantly to minimize his losses as his body simply ran out of juice.

As Bruyneel points out, it is not the sprinkling of moments of domination that define a champion, but rather the many more plentiful small acts of courage that we make each day that minimize our losses and keep us on the path.

The decision to down a recovery shake and take a nap after a disappointing ride rather than writing it off and heading for the nearest Mickey D’s are the kind of decisions on which champions are based.

“For me the real million dollar pay-off was the reminder that at the heart of winning lies heart. Technology can help you win. So can a team bus. A solid recruiting program. An inspiring mission statement. But none of these things actually do the winning. A million dollars can’t ride a bicycle. Neither can a million bits of data. It’s people who perform – out on the roads and all across the world, whether their ambition is to win the Tour De France or open a restaurant. And it’s the people who have the heart to ignore the distractions - of money and technology and managers and everything else that clamours to be a part of our lives – who wins the most.”

This is one of my favorite passages from the book. A reminder that winning is a verb. It is not a noun that can be bought or recruited. Nor is it some secret short cut. It is bred from the daily actions of winners, folks who have defined their personal victory and spent their days all-encompassed in the necessary actions associated with it, sometimes at the expense of the desires of those they bump into along the way but never to the detriment of their personal destiny.

6. Find a victory in every loss

“Sometimes if you stare long enough at a loss without blinking, you see an edge that you might have missed if you merely excused your failure and moved on”

Truth be told, I hate to lose. I have always hated losing. Growing up in the world of competitive swimming, losing is an amplified experience. After all, in a typical swim race there are only 7 other kids in the race. Statistically, there is a much better chance of winding up last or close to last than there is in mass start triathlon. I think my sensitivity and this background led me very quickly to coming up with reasons for each major loss as quickly as possible after it occurred. Note that I distinguished reasons from excuses. Excuses are justifications attributable to the world around you. Reasons, on the other hand are the causes of the loss. Excuses should be avoided whenever there is an inkling of even a possibility of personal responsibility for a loss. To voluntarily give up responsibility is to give up personal control. Chronic learned helplessness is but a step away.

Johan comes to the same conclusion when relaying the reasons for Lance’s loss in the 2003 in the long time trial. Fans will remember the picture of Lance with white salt caked around his lips finishing obviously dehydrated, a close second to big Jan Ullrich (in the process losing 15lbs over 1hr of racing!!) It is probably surprising that rather than spending the evening purely relaxing and rehydrating, Lance and Johan spent the evening ruminating over time splits and data. It was absolutely crucial at that point in the race that Lance came to the conclusion that he was the best time trialist in the field despite some bad hydration choices in that one time trial. In Johan’s words, it was important that he “admit the loss” so that they could go about identifying the reason before “crafting their next victory from the ashes of this defeat”.

7. Everything but winning is a distraction.

Do what is necessary to foster belief, lest you wind up a self-fulfilled prophecy.
Bruyneel talks openly about keeping the faith in a sport in which it is generally acknowledged that a portion of the upper echelon of the professional ranks are ‘on something’. We all face similar challenges, whether we see our competitors as superhuman due to ergogenic aids, superior constitutions, superior genetics, take your pick. Whether real or not, once a commitment is made, any focus that detracts from your belief in your own abilities is a harmful one.

Truth be told, nothing, save the extent of your resolve to overcome limiters, is absolutely deterministic in the world of endurance sports. Even, in the scientific fraternity, it must be understood that the conclusions that researchers have arrived at on the ‘trainability’ of a given individual inherently infer trainability, often for one measure of fitness, with one short term training protocol. Personally, I’m going to need a lot more than that to give up on my athletic dreams. What about you?

Well, that's enough potential copyright infringement for one article :-) So, I’ll close with a recommendation. Buy the book. Johan is one of those positive voices that you can never have enough of, whether on the bookshelf, or in your life.