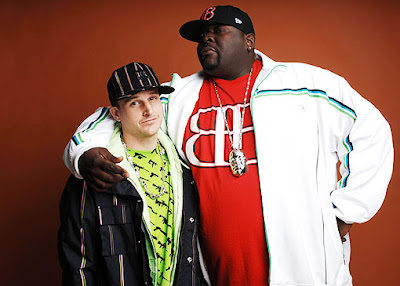 I had to include a pic from one of my favorite shows from last year, Rob and Big, when I decided to write a post on that 4 letter word – work. Big Black had a recurrent catch phrase on the show – “Do work, Son!” that I thought was particularly relevant to this post. So there you go. This one’s for Rob and Big.

It can be tempting in this world of relative measures to lose sight of the absolutes. This is just as true in triathlon training as in any other field. Doing your best is great but in the world of competition, being the best is better.

I had an interesting question from one of the athletes that I work with that went along the lines of,

“Coach, I just had a look at Joe Blow’s performance manager chart from last year (Joe Blow is a top AG athlete). I almost put in the same amount of work as him. Our CTL #’s were almost identical but our performances were a world apart. What gives?”

And so, in one key sentence in the above passage lies the problem, “I almost put in the same amount of work..”. The problem is that TSS may be a measure of stress, but it is not a measure of work. CTL, ATL and all of the other metrics associated with TSS management are relative, rather than absolute measures related to each individual’s personal functional threshold pace or power. Just because you deposit a similar TSS workload to the pro of your choice doesn’t entitle you to withdraw a similar race result. No, if you want a similar result you need to compare apples and apples, i.e. absolute measures. Or, put another way – Do work, Son!

I could see that my explanation wasn’t entirely satisfying my athlete who was still of the mind set that 120 TSS/d for one guy is the same as 120 TSS/d for another. So, I pulled up the wko #’s of the other athlete in question and we looked at another number – kilojoules of work.

My point is not that Athlete A should have ‘sucked it up’ and done more work (irrespective of the fact that matching Athlete B’s workload would have probably take him an additional 5 hours a week, not to mention burying him in the process), but rather that, when comparing across athletes, the absolute work is ultimately more of a determinant to performance than the relative training stress.

Relative training stress for a given session may not change a whole lot over the course of an athlete’s development. However, total work will. A long ride of 250TSS (5hrs at an IF of 0.71) will represent a total workload of 2500kj to a newbie athlete with an FTP around 200, however this same session will represent a total work of over 3500kj for a top AGer. For this reason, when planning long term TSS, it is not always necessary to ‘up the ante’. Providing the athlete is improving, the ante will be uped quite naturally.

All of this is not to say that an increase in CTL should not occur from year to year. Because CTL is ‘carried over’, if the season is timed appropriately, a slow and steady increase in the athlete’s CTL over the course of their development should be noted. However, this is a function of appropriate recovery and consistency within the sport, rather than a conscious choice to increase training stress. Increasing training stress is, well, stressful and is not conducive to the long term, steady progression that those seeking to discover their potential in the sport should adhere to (for more on Long Term Athletic Development, check out my article on Xtri.com)

However, when you’re consistently seeing high TSS weeks and the frustration starts creeping in that you’re not ‘keeping up with the Joneses’, it is worth remembering that there is really only one number that counts and one way to the top (for a very long period of time) – Do work, Son!

In reading this post and the latest article on Xtri am I to understand that being a slightly over weight 30yo it will take me 10 years to reach my potential in Ironman game, by then I'll be 40 yo!!

Is that realsitic? could I be at my physiological peak at 40? If this is true I'm really wishing I had stayed in better shape during my 20's instead of drinking beer and eating fast food!!

Do you have any recommended reading to understanding the TSS CTL & ATL and how to detirmine those figures and track them with some accuracy?? Is it worth doing all that fiddly stuff untill you in the 2nd half of training age?

The scenario you're describing represents the bulk of my athletes. There are some fast 40 year olds running around out there!

The good news is that the physiological qualities that are most important for Ironman don't tend to decline until after 40. You're in a good spot!

Once you move into your 'training to train' phase and are trying to build to 'breakpoint volume' monitoring training load and your response to it becomes much more important. If you're still a recreational athlete (training single digit weeks) there is not a whole lot of point to monitoring training load as it won't be limiting. Until then, work out with buddies in a bunch of different ways, train for fun and race for fun.

For essential reading trainingpeaks power 411 is a great starting point.

I guess this was aimed straight to me :D
guess who just joined th EC bandwagon...

I don't think you need any encouragement to do work ;-)

Alan,
Discovered your blog via the "Wattage" forum. Some really interesting posts here to keep me occupied for a while. You are on my reading list from now on. Regards, Colin.

I'm also posting some blogs and articles at our main site:

I would think size of an athlete would come into play also ., If a women with an FTP of 200 and who weighs 120 lbs is compared to a man who weighs 170 lbs and has an FTP of 200. Assuming they ride the same speed,at the end of a 5 hr ride. I would think the man would have burned more kj or (cal.) And if she went faster due to the better kj/w, she might have burned the same but got further in 5 hrs of riding . agree? jon

In the scenario you put forward, the total work for 5hrs at 200W would be the same for both athletes. However, the speed would not be equal nor, in all likelihood, would the physiological expenditure.

I was wondering if the example given is based on similar % volumes of swim/bike/run volumes for both athletes. When I'm using WKO it's only the bike sessions that accrue kj's, no score is given for run or swim sessions (I am using polar for run & manual override for swim Tss, not sure if other devices like garmin etc can give run kj's?).
So does this article only relate to bike 'work', if so I guess the principle is consistent across the 3 disciplines?
Or is there a way to manually override kj's into WKO as polar gives estimate based on HR but this does not seem to be taken up by program when downloading sessions?

Thanks in advance & keep up the informative posts, not sure where you find the time but we sure appreciate it.

Valid point on the kj for running. I don't think any of the Garmins compute kj for run pace, only bike power.

Most of my Ironman guys are relatively similar in S/B/R percentages (when not in a single sport camp period).

That said, the TSS values are combined bike run so that could come into play a little.

Thanks for the food for thought.