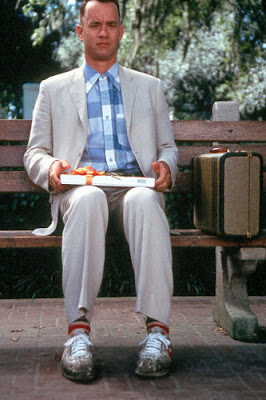 After my last blog entry, my buddy Jaakko advised me to use my skills in translating the complex math of wko+ into terms that the layman can understand, to write a book on wko+ for Dummies. In fear of copyright infringement, I elected to go with today’s title :-)

There is also a little hidden meaning to today’s title. Truth is, there is no negative intent to my use of the word simpleton (or Mr Gump). Au contraire, I deeply admire simplicity in all senses of the word.

As much as I love to deal with numbers and complex theories, the truth is, I abhor complexity. Whenever looking at a data set or a new theory, my driving motivation is to reconcile it with my current view of the simple truth, i.e. to break down complexity into simplicity.

We are all familiar with the term ‘paralysis through analysis’. The corollary to this would be ‘action through simplicity’. In other words, those who most embody action (and who, consequently, generate results) do so through a simple approach – a focus on spending their time DOING the essentials rather than analyzing the inessentials. So, this brings us to today’s blog.

Somebody whose approach I deeply respect is athlete, Tim Luchinske. It seems that the bulk of Tim’s actions are put in place with the aim to bring the essentials more into focus and I’m not talking along the lines of what logbook he selects. Check out his blog to get a feel for what I mean.

In fact, it was reading his blog over the last couple of weeks that partly prompted this post. I want to distance myself from my recent posts that seem to suggest that fulfilling your potential in sport is a mathematical problem. It is not. In order to actually ‘do the math’, requires tuning out the noise and tuning into your passion throughout the day, throughout your life. So, I write this post with that intent.

That said, there are some simple key essentials that have been known to elite coaches for decades and recently confirmed by (and elaborated within) the studies on mathematical modelling of the training process on which wko+ is based. These key principles are so key, in fact, that I have witnessed, on numerous occasions, very passionate, action oriented athletes who fail to observe them consistently perform below their potential.

So, in this post, I want to provide some of the key ‘take home points’ that I have learned from wko+ that can be applied to all athletes, irrespective of whether their training log consists of a docking port for every speed and power measuring device known to man or a writing pad sitting on your bedside table.

1. Every individual athlete has an optimal ‘chronic training load’ for any one season that is the result of their training base and constitution, not their aspirations.

In other words, every athlete has a limit to the training load that they can absorb at any one point in the training season. It is important to note/realize that this number, of what the athlete can absorb over a long term period is significantly less than what the athlete can do over a short term period. It is only through long term monitoring of large scale workload, e.g. month to month workload that a reasonable assessment of optimal training load can be made.

This optimal load will also change over the year as the athlete’s base improves. While a 50hr month may make an athlete tired in the prep period. At the end of the base period, the athlete may be able to absorb a 70hr month with no problem.

Irrespective, the take home message is to stick to one given training load until you have proven that you can absorb it (6 weeks or more) before deciding to up the ante.


2. Every individual athlete has an optimal ‘ramp rate’ to build training load towards this optimal level. Exceeding this rate results in failed adaptation (overtraining)

There are 3 basic scenarios that can arise from the application of a training load:

a) Too much load 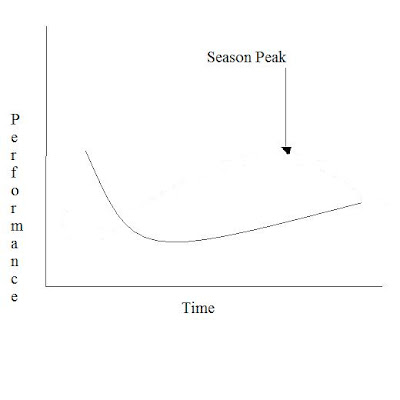 If the athlete digs too deep a hole for themselves at the start of the season, by ramping up the volume/intensity too quickly, they will exceed their adaptation reserves and fail to supercompensate, i.e. too much load will make the athlete slower rather than faster

b) Too little load 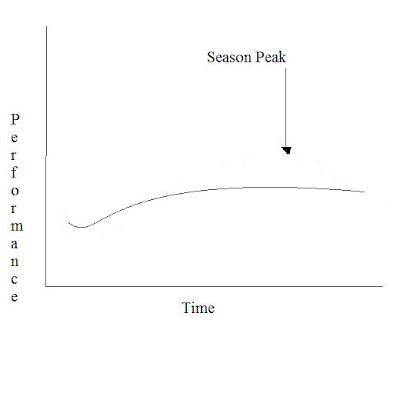 If the athlete digs too shallow a hole for themselves at the start of the season by ramping up the volume/intensity too gently, they will receive full benefit from the load very early in the training season, i.e. they will ‘peak too soon’. Obviously this is preferable to the first option as it is much easier to maintain a given level of fitness through to competition than it is to shed fatigue, get healthy and get fit if too much load is undertaken. 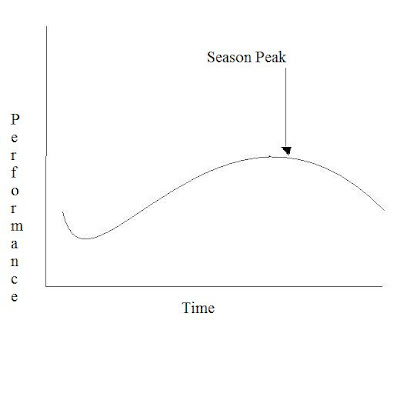 Optimal load will have the athlete arriving at maximal fitness shortly before their peak race of the year, with just enough time to taper and freshen prior to the competition.

Fitter athletes (athletes with a stronger consistency base) will generally be able to tolerate more aggressive ramp rates. However, the only way to not risk the fitness that you have accrued in the last block is to plan very moderate volume jumps from month to month until you have a proven baseline ramp rate that you have sustained over the course of a season.

The other time of the season that the athlete risks failing adaptation is in a season that extends too long. When performance begins to drop late in the season in spite of maintained/increasing load, it is time to shut her down and take a worthwhile break. This optimal length also depends on the base of the athlete and how deep the initial hole is dug. Generally, this time period will be in the vicinity of 3-7 months.

While the seasonal gains that an athlete can expect from appropriate tapering are less than those that the athlete can expect from training, the relative benefit makes allowing time for an optimal taper a key inclusion within the training plan. In a wko+ sense, an athlete can, under a good case scenario, expect a 10-20% improvement in fitness (CTL) from month to month. However, freshness (TSB) can improve almost 200% within 1 month of reduced training! This is worthwhile remembering when considering ‘doing a little more’.

Wko+ is a tool that enables athletes and coaches to reconcile the relationship between training load and relative performance. It is especially useful as summary statistics for those athletes who experience frequent fluctuations in training load to keep track of expected fitness and to forecast what load modifications will lead to the best result. However…..

For the serious athlete, controlling variables should always be a higher priority than measuring them.

You are the wind beneath my wings :-)

are you spending most of the summer in Boulder?

Could be nice to hit the roads with all the good people i've met and talked to via this interweb thingy :D

I'll be around for most of the summer. Sure I'd love to ride with you.

We'll have to level the playing field somehow. Maybe you'll have to ride with your brakes on or something :-)

Hey Alan, Thanks for this... Hope you travelled home safe from Tucson. Speak soon.
Bobby