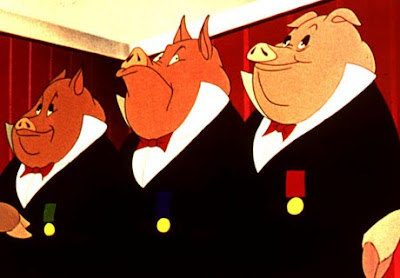 “All animals are created equal but some are more equal than others” – The Pigs (Animal Farm).

As the pigs suggest in one of my favorite reads, there are situations where while things may appear equal, in reality they are not. One of these situations is in the realm of training load.

While 3000kj of riding is always 3000kj of riding, the direct impact that this amount of work has on your race performance varies greatly throughout the training year. One of the most practically applicable discoveries that has come from studies that have sought to mathematically model the load-performance relationship (e.g. Banister, 1986, Morton, 1991) is that the contribution that load makes to performance varies with the timing of the load with respect to the key event, i.e. there is a critical period where it is optimal to really ‘lay down’ the big load blocks and there is a quantifiable difference to be had by placing a training camp 4 mths vs 4 weeks before your goal event.

Below you’ll find an example of a ‘typical’ influence curve that speaks to some of those issues. 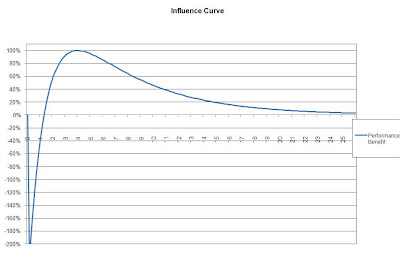 The chart shows weeks from goal event along the x axis, with relative performance benefit of a given training load along the y axis.

As you can see from the curve, there are certain times of the training cycle that work is very beneficial. At other times it is quite detrimental (e.g. during the taper) period while at other times of the cycle it is neither here nor there.

From a period of 0-14 days before the competition, workouts generally have a pretty marked negative effect on performance, i.e. the freshness that the athlete gets from relative rest gives more to performance than any workout during that time could. Hence the importance of the taper.

Workouts in the 14-21 day period are in that grey zone. For some athletes they will have some positive benefit, for others little or no benefit. In general, this time period falls in the ‘if in doubt, leave it out’ category though some individual experimentation with 2 vs 3 week tapers is warranted.

The period of time between 3 and 12 weeks prior to the event is the critical period in which load has the greatest effect on performance for most athletes. That loading block from weeks 7-3 is particularly important for most athletes and a big relative performance jump can be exploited with significant loading in this block (a training camp, a couple of big weekends etc).

The period of time from weeks 12-26 before the target event can best be termed ‘training to train’. It is a period that, in terms of undertaking heavy training loads, risk greatly exceeds reward. To put in perspective, a 6hr solid ride in this period is worth less than what a moderate 3hr ride would be worth during the critical loading period! Yet undertaking these loads in the early season could significantly compromise the athletes ability to undertake the big loads when they count. This is a very common occurrence among self coached athletes, the so called “February Rock Stars”.

These recommendations change a little bit depending on the individual peculiarities and training status of the athlete, with larger athletes and better conditioned athletes usually requiring longer tapers and smaller and less conditioned athletes benefiting from shorter tapers but the general trends hold.

By far, the most important training for all athletes occurs in that 3-12 week window before their key event. Any training before this, while not insignificant is merely setting the scene for the ‘real training’ to come. While perhaps not as well understood, pacing the season is a skill that is just as important as pacing the race. Hopefully by being able to quantify the relative benefit of any ‘hard workout’ in the early season it will enable you, the athlete, to make better decisions with respect to where to distribute your efforts. For, as the pigs allude, not all training efforts are created equal.