You are off course 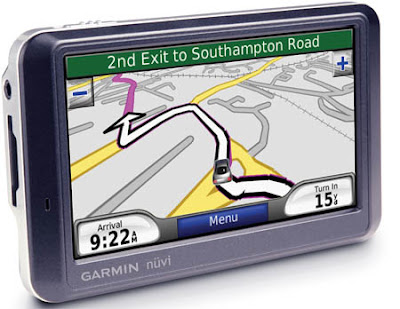 This past weekend I did one of my favorite things – I packed up a (relatively) small selection of my worldly belongings into a set of panniers, grabbed my bike and took off in search of adventure. While, the act of seeking adventure would have been rewarding in itself, I had a destination in mind – the top of Pikes Peak. This was my second attempt at the summit after being turned around the last time that I attempted it (about a month ago) due to icy conditions.
So, I grabbed my bike, my trail shoes & my Garmin and took off on the 115mi ride to the Springs followed by a 24mi hike (+10,325ft) to the summit…. 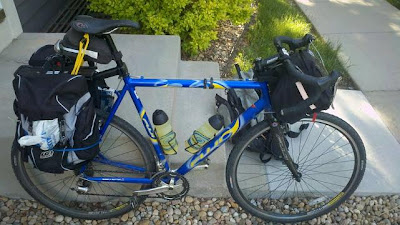 I had planned out the route the last time that I did it and uploaded to my Garmin 310XT. For those unfamiliar with this Garmin, while it doesn’t have full function mapping typical of the Garmin units that you might see in cars, it has a neat little ‘breadcrumb map’ which shows you the general direction you should be heading and lets you know if you’re ‘off course’.

The first time that I used it there was a bit of a learning curve. I brought the map up and hit the “Do Course” button and attempted to head in the direction of the map but within a mile of starting my watch started buzzing – “you are off-course”. I could see my little arrow looked to be right on the planned line on the map but I obviously wasn’t going where I wanted to go. I thought to myself, this thing is useless! In fact, worse than useless, I had planned out a detailed, pretty complex route to Colorado Springs incorporating trails and secondary roads to avoid the hustle and bustle of the more travelled routes but at least the travelled routes had street signs! I had what looked like a clear map in front of me, but I plain and simple wasn’t able to follow it because the big picture perspective obscured the fine detail that was needed to make the right turns to get to my destination.

Chuckie V wrote a really thought provoking post on his blog this week (http://chuckiev.blogspot.com) that reminded me a lot of this experience. The ‘text book method’ of planning training consists of putting together this big picture road map along the lines of what Joe Friel recommends in the Triathlete’s Training Bible or what Tudor Bompa recommends in his legendary training text - Periodization: Theory and Methodology of Training but anyone who has followed the textbook method can probably relate to the experience… You spend countless hours putting together a detailed annual training plan, you kick things off, excited and fired up that this plan will get you to your goal and then before too long something happens and sure enough you’re getting the metaphorical buzz – “You are off-course”. Believe me, at times like this it’s more than tempting to throw your big picture plan (and the watch that it’s attached to) out the window and resolve instead to ‘feel your way’ to your destination.

The above paragraph pretty well sums up how I was feeling when I rolled through my first intersection.. “You are off course”. Alright, let me stop, turn my bike around and try another direction.. “You are off-course”. This process of elimination was going to make for a mighty long ride to the Springs. Until…. I discovered that if you press the little side buttons on the Garmin it allows you to zoom in and makes the immediate route more clear. Genius! I can zoom in to an 800m scale and all of the turns that I need to make suddenly become much more clear.

Relating this to coaching, I realize I do the same thing in planning an athlete’s training program. While the very general big picture map is there a couple of screens away to guide the overall route to the destination, my specific 'nitty gritty detail' focus is on the immediate block of training. What training sessions and what training load are going to get us to our short term destination? While the big picture plan is somewhat useful in plotting what those short term destinations may be, the scale is both too fuzzy and too overwhelming to be of practical value on a day to day basis.

So, after discovering those little side buttons I thought I had it figured. If in doubt about which way to go, I’d simply scale down to look at how to get to the next immediate objective. But then a funny thing happened. I was riding along to the next path that I had plotted on the map and I get there and discover that what I thought was a bike path was actually a golf course path. Now, I’m not one to adhere to the rules when I need to get somewhere but getting to this particular path from the road I was on would require a 20ft rappel down a sheer wall with my 75lb loaded bike! It was impassable. I thought, oh great, one little mistake and my whole plan is wrecked. I was tempted again to throw that Garmin off the rock wall! I now had no choice but to abandon the well thought out plan and go off-course. So, I took off in the general direction of where I thought I needed to go and noticed a very cool thing. While my arrow may have been off the course, having the perspective of where the course goes, gave me something to shoot for. I tracked parallel to that course until I found a way to cut across. I took it and I was back on plan.

I had another one of these occurrences happen as I was going through the trail that runs through the Air Force Academy. I had no idea that there was a trail closure until I was pretty much on top of it. And another as I approached the summit of Pikes Peak, the planned trail had knee deep snow that was practically impassable. In both instances I had to find another way. Thanks to my (now trusty) Garmin, I was able to head off course confidently knowing that I would be able to eventually find my way back to the planned route if I just kept it in sight.

Point being, as Chuckie very eloquently points out, things almost never work out 100% according to plan. There will be times when you hit unforeseen road blocks and obstructions that make you feel like throwing the plan into the nearest river but if you persist, if you pick realistic routes, if you focus on the short term while keeping the long term in the back of your mind, if you are flexible enough to temporarily divert from the plan when needed while still recognizing the importance of having some semblance of a route to your destination in sight at all times, you will arrive at your destination far more quickly & surely than someone who starts the journey without a map. As the Cheshire Cat very truthfully observes in Alice in Wonderland 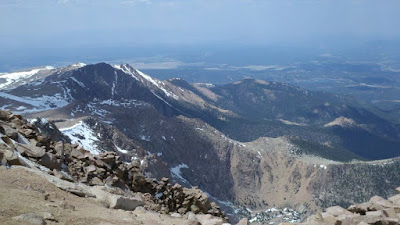 Train Smart.
AC
Posted by Alan Couzens at 9:36 AM

Well said AC. I *never* travel without a map, but just the same, there are seldom any maps showing all the closures and reroutes and obstacles that lay ahead. Even relief maps don't! But I don't panic; I just stay the course by staying as close to the course as possible!

Again, I'm envious of your trip. We'll have to plan a quick excursion this summer!

Absolutely CV! You get to tow the trailer. It's called handicapping ;-)