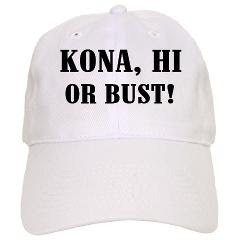 Alan Couzens, MS (Sports Science)
Gordo and I are currently writing a series of articles for the Endurance Corner website on the topic of “How to Qualify” for Kona (http://www.endurancecorner.com/How_to_Qualify ). I thought I’d expand a little on some of the ideas presented to this point by offering up a couple of case studies.
The first (an example of what not to do) is the story of my own athletic journey through the 2011 season…
In November 2010 I signed up for the following year’s Ironman Arizona with the express intent to qualify for the 2012 edition of the Ironman World Championships in Kona. This post will describe how the journey played out, what I did wrong and what I intend to do differently the second time around in 2012.
The commitment to the Kona goal actually took shape early in 2010. After a number of very inconsistent months of training I found myself essentially ‘starting from scratch’. As a full-time coach, primarily of high level age group athletes, I was in the unique (and perhaps not ideal) position of knowing exactly how out of shape I was relative to where I wanted to be and of the true extent of the journey ahead. At that point, based on that knowledge along with the knowledge of my own training response, I was aware that building to the level of fitness necessary to qualify was, at best, a 2 year proposition.
2010 went close to plan, with a progressive build in both load and fitness. For the more numerically inclined, Chronic Training Load (CTL) going into the 2010 season was a measly 27.3. CTL peaked out at 78.3 at the end of September, a steady gain of ~50CTL over the course of 9 months. My big goal for 2010 wasn’t a race or performance goal, as I knew that based on the starting point PR’s weren’t really in the cards. The big goal was to not have any extended periods of time off as I did at the end of 2009. I wanted to go into 2011 fresh but holding onto a good chunk of the fitness that I had built in the 2010 season. I accomplished that end and began 2011 at a CTL of 45.9 TSS/d (almost 20 points higher than 2010). Based on my experience in studying ramp rates of other athletes, this platform represented a challenging but possible distance from the ~130 TSS/d that I tend to see in male athletes of my age & average ‘trainability’ (expanded on here http://www.endurancecorner.com/Alan_Couzens/athlete_type ) who qualify, assuming a consistent, uninterrupted build over 10 months of preparation in 2011.
Here are the TSS & CTL progressions (monthly average/totals) that I planned at the start of 2011 compared with how it actually went down.

January was strength focused and close to plan. February included our 2011 Tucson camp so load and fitness both bumped above the planned progression. March through June were on or very close to the planned TSS ranges of ~2100 to 2900TSS per month, leading to me closing out June with CTL right on the planned progression at 92.6TSS/d. July was where fitness began to stray from the Kona path.
(My now wife,) Jen and I went to Hawaii in July to get married and training took a necessary back seat. We had a very active wedding/honeymoon, and were able to fit in lots of ocean swims, runs, hikes etc. but the realities of travel time, celebrating with family etc made the planned training load simply unrealistic (2498 of a planned 3118TSS for that month). Looking back on it, I wouldn’t change a thing about the experience (one of the best times of my life!)but I would be more realistic in planning ‘breakthrough athletic years’ to those years without any major ‘life events’ interspersed. I should have taken my own advice on the significance of a mere 2 week period of reduced training presented here…( http://www.endurancecorner.com/How_To_Qualify/AC/realist)
August was a great month. I found it very easy to get back on plan with the inclusion of the EC Colorado climbing camp. Load totals were BIG & right on plan for that month.
September was a similarly solid training month and my highest hourly load for 2011 at 78.5hrs. In fact, I hadn’t put together 2 consecutive months greater than 70hrs since August/Sept of 2004 so, despite closing out the month a little lower than the planned TSS, I was satisfied. In retrospect, this is the second error of the year. As Winston Churchill accurately observed, “sometimes it’s not enough to do our best. We must do what’s required.”
I did a ‘state of the nation’ assessment in October and became aware of the impact that a light July had on my Kona aspirations. I would be lying if I didn’t concede that seeing that goal slip from my fingers had a negative impact on my ability to keep the big weeks rolling along and, despite a solid camp in Tucson with the EC gang, October turned out to be a very light month – less than ideal that close to my A-Race.

November was an appropriate taper based on the CTL that I was going in with but significantly under the initial plan. Going into the race, I was relatively confident based on both my training numbers and simulation workouts that I had a good shot at breaking 10:45, a long ways from Kona qualification but still a best over the distance for me. Due primarily to some nutritional ‘issues’ on the day, that didn’t transpire and I considered myself fortunate to finish under 13hrs. Taken from this perspective, I’m somewhat glad that the year didn’t go 100% according to plan as, if I had have had the fitness to qualify and failed due to messed up execution on the day, I’m sure it would have stung significantly more than it did.

My nutritional issues (and a plan to remedy them in 2012) is the subject of a future post but it is worthwhile taking heed that fitness only explains a part of the Ironman performance equation. Execution on the day (esp nutrition and pacing) are almost equally important. In fact, I did a multiple regression analysis some time ago for the XTri site of the relationship between lab measures and Ironman performance (http://www.xtri.com/features/detail/284-itemId.511709869.html) and found that, among our complete data set, the lab measures (VO2max, LT, fat oxidation) only explained approximately 60% of the variance in Ironman times!

Up until now I’ve been using CTL and fitness synonomously and while, based on my observations, the 2 very closely relate, let’s take it out of the realm of the abstract and look at fitness in a little more depth and in the context of the EC article that I wrote on appropriate benchmarks through the year for the Kona bound athlete (http://www.endurancecorner.com/How_To_Qualify/AC/benchmarks) . I’ve expressed the same benchmarks in the EC article using my own stats (35yo, 1.93m, 80kg bodyweight below

Overall, the numbers confirm the conclusions made above, i.e. that fitness as a whole was on track through to July and fell off track from that point through to the race. Looking at the various components of fitness (across sports and across the power-duration spectrum), however, can often reveal trends in a little more depth than looking solely at trends in training load. For example…

My strength training was put on the back burner with the inclusion of some epic weekend adventure trips and the camps (I was usually not recovered in time to hit the early week strength session) so I’m not sure whether the 210lb/12 squat would have happened. My gut says probably not. I will plan a longer strength emphasis for 2012.

Across the sports, if I had to nominate a weakest sport, it would be the run. While I was easily exceeding the swim and bike benchmarks early season, it took me a while to get on track with the MAF tests. These, along with the 190lb/12 squat benchmarks fell into the ‘just made it’ category. This makes sense when I consider that this year was relatively bike heavy and run light (27% vs a planned 33% of total load).

The final trend somewhat evident is that there are a lot more reds in the long benchmark tests than the short ones. While some of this effect may be related to the fact that most of the long benchmark tests were planned for later in the year, when general fitness was falling off plan, if we look at the July/Aug benchmarks, I significantly exceeded the CP5 and CP20 targets (397W & 332W resp) but missed the 2.5hr # - with a seasons best of 256W. Overall, my fatigue curve from the year was a rather high 8% ( http://www.endurancecorner.com/How_to_Qualify/AC/fatigue_curves ) This confirms to me, the importance of a continued focus on general preparation (aerobic base + strength) in 2012.

In my next post, I’ll present a ‘what to do’ case study from a first time qualifier that I coach and highlight the differences (Hint: If fitness is ‘on the edge’ don’t take 2 weeks off in the middle of the prep :-) I will be using that model, along with the observations above in planning my own Kona or Bust Phase 2 : The 2012 assault!

Great write up and best of luck in 2012!! Have you thought of racing a bit more? Helps work through bugs and offers a fun and different stimuli.

Matt C - I will be doing a few more short races in 2012 (5Ks etc). They seem to carry a bit more positive mojo weight than just hitting test sets in training.

I'm still undecided on a half - For me at least, there's a noticeable fitness cost (CTL drop) to racing halfs. I may do one untapered for fun.

Definitely not a double IM year. Very hard to build fitness IMO with 2 IM's in a year.

Thanks for the kind words and support!