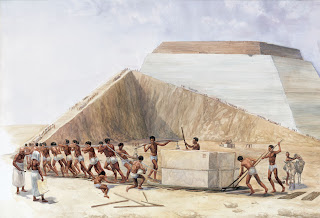 In my last article on “building your performance pyramid”, I covered the second tier of an endurance athlete’s performance structure, i.e. aerobic capacity or endurance. I suggested that, while maximizing your ability to generate energy from fat is a worthy health goal, from a performance perspective, the specific endurance that typifies triathlon racing, all the way from sprint triathlon to ironman requires a higher level of output than fat burning can produce. A level of output that must be trained for and supported with a higher level of carbohydrate in the diet during these periods of specific preparation.


Looking back at the series so far, I’m seeing that it’s turning into a big list of “dumb things that athletes do” :-)


Dumb thing #1: Live a stressed out, nutritionally deficient life and expect your body to adapt to the hard training that you’re putting into it.


Dumb thing #2: Train hard enough to deplete your body’s energy reserves on a frequent basis then fail to re-pay these reserves because you’re taking nutritional cues from Dr. Atkins.


And to complete the trilogy of dumb things that athletes do….


Dumb thing #3: Train like you’re preparing for an event that lasts 2-10 minutes when your event actually lasts 2-10 hours.


I get it. You’re time constrained and on the hunt for the most ‘time-effective’ routine out there. This  leads you to training sessions that make you feel as though you “got a good workout in” within a limited period of time. You may even be able to justify your choice of high intensity training by citing (short term) studies like the following that show improvements of 2-5% in VO2max after only 2-4 weeks of high intensity training (e.g. Lindsay et al., 1997, Westgarth-Taylor et al., 1997, Stepto et al., 1998)


The problem with this approach is that you’re adding to a very wonky, top heavy pyramid & it's a matter of time before it comes tumbling down….


2.       These high intensity workouts are in no way, shape or form, specific to the demands of your event.


3.       You’re teaching your body to use (& crave) massive amounts of carbohydrate which, as discussed in part 1, is just plain unhealthy!


Let’s look at the first one, the issue of trainability. With the excitement over David Epstein’s book “The Sports Gene”, the question of ‘trainability’ is quite timely. We’ve known for some period of time that the anaerobic capacity of athletes is a largely heritable trait (e.g. Szopa et al., 1996, Klissouris, 1997, Bouchard et al., 1997), i.e. speed/power athletes are largely born as speed/power athletes. Put another way, an athlete’s ability to ‘swing’ their anaerobic capacity in one direction or another is quite limited. This is the reason that, in the world of elite sports, the ‘sharpening’ phase of training is relatively short when compared to the ‘base’ phase of training because, experience has taught coaches that if anaerobic ‘sharpening’ training is continued too long, performance plateaus and eventually regresses. If you want a real time example of this, head on over to any triathlon forum and look at the athletes touting the benefits of “high intensity training” These athletes seem to go silent after a month or 2 or, if they continue, they ascribe their plateau to reaching their genetic limit. Maybe they have reached their genetic limit for anaerobic capacity, on the positive, though, they’re competing in an aerobic sport, right? Which brings us to the second point…


Blood lactate levels in triathlon events from 2-10hrs range from 1-4 mmol/L indicating a very low anaerobic contribution to performance. In these events, the energy limiter is not the rate at which glucose can be converted to energy but rather….


1.       How quickly you can metabolize the by-product of this conversion (i.e. the pyruvate that is created) so that muscle acidity doesn’t increase.


In other words, aerobic and metabolic fitness – tiers 1 & 2 of the performance pyramid.


For all but a handful of triathletes, the peak of the pyramid (speed/power) is overly developed when compared to the levels below it. The average Ironman athlete has no problem producing enough pyruvate to fill their mitochondrial ‘buckets’ at race pace. In fact, most have a large reserve which leads to a good deal of overflow & undesirably high blood lactate levels. This, in turn, creates a ‘wonky’, unstable upside down pyramid that looks like this… 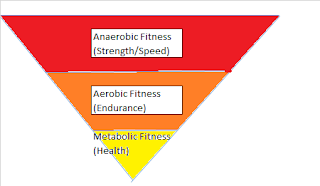 Put more simply, 99% of athletes already have more than enough of a “speed/power” reserve for long course racing and don’t need to emphasize work that leads to high levels of blood lactate. Maintain? Yes. Develop? No. What they really need is more fitness specific to their event & especially, a stronger health base so that their training consistency and body’s ability to absorb the training that they put in is maximized.


So what does it take to maintain your anaerobic capacity while building the base layers of your pyramid? While every athlete is different and should be tested periodically, my suggestion would be to start with no more than 5% of your weekly training time at pace/power levels at or above the 4mmol/L mark. For an athlete training 10hrs per week, 30 minutes total (divided among the 3 sports).


The exception to the rule occurs when we have an athlete who isn’t able to generate even moderately high max blood lactate levels. After discounting the effect of nutrition or being over-reached, some athletes have simply taken aerobic training too far (or have let strength/power slide too much). By cutting off the top of their pyramid, the absolute size of the pyramid is reduced.

While this doesn’t greatly affect performance over those long course races, (where performance is a composite of aerobic and metabolic fitness) it does affect the athlete's short course performance & it also seems to affect the training response of the athlete, i.e. athletes lacking in strength/power don’t respond to aerobic training as well as athletes with moderate to high peak power outputs, presumably because the size of their training pyramid (pool of trainable muscle fibers) is diminished.


·         It is quite rare for the ‘sexy’ elements of fitness, i.e. VO2max, threshold et al. to be true limiters for age-group Ironman or half ironman performance.


·         An unnecessary focus on these qualities can lead to stagnation of performance, inadequate preparation for the demands of your event, negative changes to your body composition & poor health.


·         When a speed/power block is indicated, it can and should be a short & sweet ‘remedial’ cycle before returning to the training that offers long term gain & is truly specific to the event.


With apologies to whichever wise coach I’m stealing the following quote from; “Speedwork is the icing on the cake. Most of you don’t have a cake yet.”

Great article, definitely highly relevant right now! Do you think strength training complexes would provide adequate stimulation to keep the top of pyramid from limiting your aerobic work or does the high octane stuff need to be more sport specific? In other words, if you have a developing endurance athlete do you think one could reach those high end-of-test lactate levels through easy/steady work (and maybe some strides etc) and weight training alone?

Hi Dennis, I think it's good practice to maintain a tiny bit of sport specific lactate work within the program. Economy during strides and economy when you've got 10mmol of lactate in your legs are 2 different things :-) Makes sense to me to stay in touch with that through the year.

While we're on the topic of Vo2max, my understanding (which could be wrong!) is that Vo2max is "maximally trained" after 10-14 weeks of training. Furthermore, a "low responder" might see a 0.2L/min increase over a given period and the "high responders" topping out a ~0.9L/min.


So, my question is, what is going on during the other phases of training that allows for another ~0.5L/min "bump" after another round of Vo2max work? Or rather, is there some "ceiling" that an athlete starts to bump up against after 10-14 weeks and thus they need to do ??? in order to push that ceiling up again?

The studies that have come to that conclusion have had 2 main issues.. 1. They typically used relatively high intensity training (which does lead to a plateau) 2. They were typically too short to see the big picture i.e. while a 'relative' plateau occurred, improvement continued, albeit at a significantly slower rate.

Your comment on response, though, is bang on. Lots of variation in the rate at which aerobic capacity improves.

Further improvement demands more demand for O2 within the muscle (i.e. more mitochondria). ST fibers offer the greatest potential for improvement here, so the short answer is... more base.