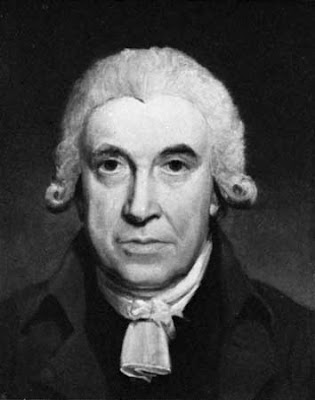 The pic today is of James Watt, the ‘brother from another mother’ of the inspiration for my previous post, James Prescott Joule and the guy, I guess, who we can very indirectly thank for our power meters :-)

I received some good feedback from my last post on Energy Pacing your Ironman. I also received a number of questions that the article left unanswered. One, in particular, got my attention:

very interesting concept, and - as usual - a very well written post. One more thing (for clarity) can you add a similar table mapping the watts and body weights to IM bike splits (assuming these are the main areas of influence)? I know that this will be a gross simplification as there are quite some differnces in hills, aerodynamics etc. (I've seeen some rought tools that would allow to build such a table, but I'm hoping you've something like that already prepared.)

Such a table could be a great tool to provide a comparison between bike and run times - something better than "your run time should be 2 hours faster than your bike split" ..

“ Truth be told, there is a speed advantage to a slight negative bike:run split (more so for bigger athletes!!) due to the energy on the bike that is ‘wasted’ overcoming aerodynamic drag. Put plainly you get more speed bang for your energy buck on the run where extra energy goes to increasing speed rather than overcoming additional aerodynamic drag. So, the athlete should seek to slightly exceed these run standards.”

This law of aerodynamics is termed the theoretical square law and it basically states that the resistance increases with the square of the velocity. Or put another way, the faster you go, the more the energy demands increase – exponentially!

This begs the question, if our energy stores are finite, and are best devoted to the slowest speed/lowest drag discipline (i.e. running), what is the optimal bike/run allocation?

As Thorsten correctly points out, there are numerous considerations that make a truly accurate assessment of an equivalent bike speed vs power difficult to ascertain. Still, that won’t stop me from trying :-)

Below you’ll find a table that looks at energetically equivalent bike splits for a given power output for athletes of different stature on a flat and a hilly Ironman course. 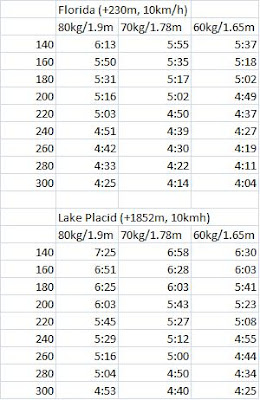 The data are derived from Bassett’s (1999) power equations using the appropriate elevation and climbing data and a constant wind speed of 6mph.

The CdA for each of the different athletic height:weight combinations are from Bassett’s recommended estimates multiplied by an arbitrary Ironman adjustment factor of 1.1 based on the more conservative positions of Ironman athletes.

The following charts use the above data along with the power vs run speed data from last week's blog to illustrate the difference between bike and run splits for a given bike and run power output. 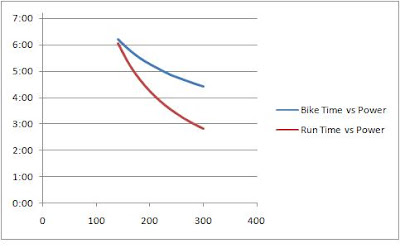 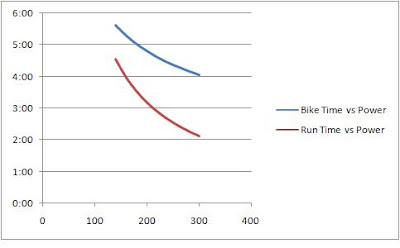 Looking at the 2 charts, the first shows a comparison between prospective bike and run splits for an 80kg athlete averaging a nominal power output for the bike and run resp. It is clear that as average power goes up, the athlete gets more ‘bang for their buck’ by distributing more of their energy to the run.

The second chart shows a similar scenario for a 60kg athlete. From the charts, it is clear that,

a) All athletes who average more than 130W (~13:30 Ironfolk and better) across the course of their race will benefit from holding back a little on the bike to distribute more energy to the run.

b) The faster the athlete, the more that they benefit from holding back on the bike (with the exception of fast bike pros who must weigh this benefit with the potential benefit of the pack draft)

c) The smaller the athlete, the more they benefit from holding back on the bike.

The following is a graphic representation of the bike/run relationship derived from the tables for an 80kg athlete putting out an average 200W/720kj per hour on a flat course over the course of the event, with their respective finish times (with an arbitrary 1:15 added for swim and transitions) for each strategy: 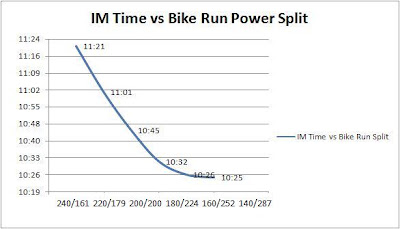 Over an hour separates the different pacing strategies for an athlete with the same fitness/energy output. Clearly, pacing is a critical aspect of Ironman racing.

From the graph it can be seen that, as highlighted in my previous blog, an even energy split of 200W is not a bad way to play things. The more typical 220W bike + ~180W (4:40) marathon results in a split some 16 minutes slower. The also typical 240W bike + 160W/5:15 ‘blow up’ on the run results in a 36 minute slower overall time for exactly the same total energy output.

But can we gain even more ‘free speed’ by saving more energy for the run?
The real ‘sweet spot’ for an 80kg athlete on a flat course begins to occur at a 180/220W energy split or 180W bike/3:51 run. Marginally better results can be had at a 160/250W (~3:30 marathon) providing this pace is below the athlete’s anaerobic threshold and the athletes CHO/Fat oxidation threshold (the point where fat burning begins to shut down).Remember, this effect is amplified for smaller or faster athletes.

With the possible exception of the leading pro males who must weigh the relative benefit of staying with the group vs saving some energy for the run, nearly all of us can benefit from taking the theoretical square law of aerodynamics into account when formulating a pacing strategy. Remember that any time you (or your competition) decide to ‘put the hammer down’ on the bike you are (exponentially) throwing energy into the wind that you could be using to fuel propulsion on the run.

Hi Alan,
a question not directly related to this post. From your workout brief descriptions your entry from 4 days ago mentioned your resting HR was <40, weight down 2lbs etc, was there something in this info that you interpreted to show you were in need of a day of R&R?
Are there times a very low resting HR is a sign of further rest required?
Thanks AB

Yes, during the bigger volume weeks one of the first signs of tiredness for me (in addition to being cranky/moody) is RHR and exercise heart rate for a given load start to drop. This is related to an increase in plasma volume that has been linked to overreaching.