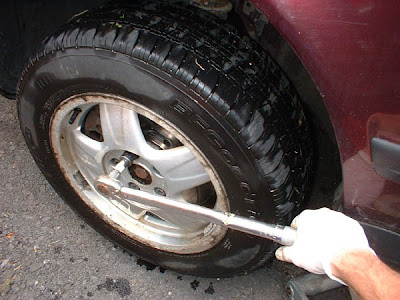 “My Strength is my Strength”
- Matt Reed

The introduction of power meters in cycling has not only led to significant improvements in training and racing execution but it has also led to a bit of a paradigm shift from a ‘physiological’ model of race performance to a more ‘mechanical’ model.

Let me explain, when it comes down to ‘nuts and bolts’ in order for a cyclist to produce more power he must either increase his cadence (revolutions per minute) or increase the force that he is imparting on the pedals (his torque). While cardiovascular capacity clearly plays a role in the cyclists ability to remain ‘aerobic’ while producing the requisite force, it does not change the fact that there is a minimal force that is required in order to produce competitive race powers and consequent speeds.

Irrespective of how ‘fit’ an athlete is, if they lack the necessary strength reserve to produce this force, they are out of the game (picture a Kenyan runner in a Tour De France prologue).

So, a distinction has been made between strength-endurance sports and ‘pure’ endurance sports, with accompanying physiological distinctions separating the two. In the world of strength endurance sports such as rowing, cycling and cross-country skiing, physiologists have identified an optimal muscle fiber ‘make-up’ that distinguishes those successful in these sports from their ‘pure endurance’ cousins.

Specifically, Neumann (2000) through extensive muscle biopsy studies of strength endurance athletes has identified an optimal fiber composition ratio of 1.3:1 between fast and slow twitch fibers. This is distinct from the ratio of the percentage of slow and fast twitch fibers, but instead, refers to the size difference if two representative fibers, one slow and one fast were compared side by side. See figure below: 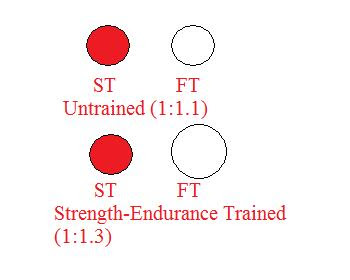 In an average young, untrained male, typical FT:ST ratios will be 1.1:1. On the flipside, world class powerlifters, Olympic lifters and sprint runners exhibit ratios in the neighborhood of 1.5:1. As mentioned, the optimal number for a strength endurance athlete is 1.3:1.

Clearly then, taking an athlete from an untrained state to a trained state in a strength-endurance sport requires some training designed towards FT fiber hypertrophy.

Of course, the caveat in this training must be that size does not come with a decrement in the aerobic capacity of the fibers. In other words, any hypertrophy that occurs must be able to be functionally supported by the aerobic energy system. This represents a challenge from an exercise prescription stance. As strength-endurance coaches, we want a stimulus that is sufficiently ‘easy’ that it can be supported aerobically (and ideally not chew through a whole chunk of the glycogen that is intended to fuel the rest of the weekly endurance training) but sufficiently ‘hard’ that it results in significant FT recruitment. The good news is that, despite the name, fast twitch fibers do not require high movement speeds in order to be recruited, but they do require relatively high levels of torque.

Specifically, FT recruitment begins at approximately 40% of MVC and peaks at ~ 80-85% MVC (Fry, 2004). Obviously, these numbers can be easily transferred across to %RM numbers for an array of gym exercises, but they can also be applied to set specific ‘on the bike’ strength workout prescriptions for those athletes training with power.

Therefore, if we want to design a workout that significantly recruits his FT fibers we want torque numbers of ~340-680 inch-lbs (40-80% of peak torque). This leads to two distinct workouts that I consider absolutely integral to my athletes’ strength development:

At the lower end (40-50% of max torque) this takes the form of long strength endurance work, e.g. long rides in the mountains with extended periods at low cadences … (in fact, Reiss (1992) discovered that professional cyclists perform 30-50% of their basic endurance work as strength-endurance climbing). In my training prescriptions, I will often program 20-90min periods at very low cadence (30-50rpm) and moderate force. These are typically (though not necessarily) easiest to do as long moderate climbs.

At the upper end (80-85% of max torque) these workouts take the form of big gear hill repetitions. These can also be done as long sub threshold intervals on a long climb or as repeated VO2 efforts (at a higher cadence) up a shorter hill.

A couple of specific examples of these 2 workouts from power files of an athlete that I coach. This particular athlete has max power #’s of ~880W at 90rpm or 825 inch-lbs.

Workout 1 is a long (60min) aerobic climb @ 160-180W (tempo intensity for this athlete) with 2x20 minutes done as strength-endurance work @ 40-50% peak torque (330-420 inch-lbs – indicated by the two dotted blue lines). In real world terms, this means 160W-180W @ 40-50rpm. This represents a pretty moderate strength-endurance load, one of the early workouts in this athlete’s strength endurance block, and, providing the athlete tolerates this well (which is largely dependent on the gym work that is done in the phase preceding ‘on the bike’ work), I would look to extend this to a 2x30-40min set, even for an intermediate athlete. 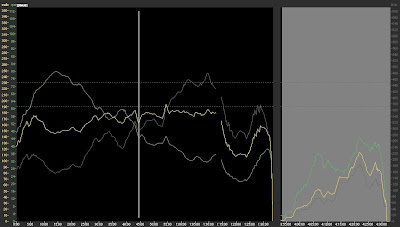 As you can see from the file, the athlete gets a little over-ambitious by taking the cadence down a little too low, below 40rpm, which takes the torque a little above the target upper range of 420 lbs/in but overall this is a pretty decently executed workout. 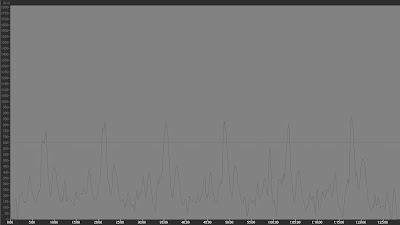 In this particular case, the workout was done on a hilly circuit, hence the long recovery periods,. Ordinarily I would prefer more reps (10-20) with relatively equal work:rest periods, but it still serves to illustrate the core concept of a torque vs a power goal for the key strength workouts.

I will typically program the first type of workout 1-2 times per week depending on the phase of training and the needs of the athlete and the second 1-3 times per week depending on the same (hopefully this conveys the importance I place on strength for strength-endurance athletes!!). The second type of workout is best preceded by a phase of gym training with similar movements and loads in a more controlled setting. Even when doing 3 strength workouts per week, doing at least one of them as a form focused workout in the gym is good practice.

In summary, I think the simple fact that in order to go faster in your Ironman bike split requires the strength to push a bigger gear at the same or better cadence is often forgotten. Competitive Ironman bike splits require the strength to push a gear in the vicinity of 53/12-15 or 225-275 inch-lbs for very long periods of time (and then run well after that!!). Even if an athlete currently lacks the requisite fitness to attain these levels of competitive race power, by slowing down the cadence, they can train their strength reserve to the point that they can easily accommodate competitive race force. In this way, for endurance sports, the development of aerobic strength endurance is a performance reserve. For an athlete must have sufficient muscle mass to propel the body at competitive race velocities even if they cannot yet do so aerobically or lipolytically. Developmentally, strength is the first step.

Good reading! I do agree that strenght is key, specially for the long-term commited athlete and even more for those who begin or restart on the sport at an older age! And after that first serious season training/competing I got that point and realized about the importance of improving my torque before anything else.
My main workout of the week was something around that "type 1" you mentioned but lasted a little more than what you prescribed. The other workout was a 1km hill repetition with work/rest ratio of 1 to 1. That particular workout I was looking for even lower cadences and aiming higher gears and that made me suffer a lot altough made me much more confident for my HILLY HIM of the season where my bike split got a lot better and my run was tremendous.
If possible, please let us know for how long on the season do you prescribe this kinds of workouts and how do you accomodate run strenght training on a consistent basis for an IM athlete.
Keep this thoughts coming, thank you, Marcos!

I am generally a fan of shorter macrocycles, so I tend to limit any one phase to 4-6 weeks. That said, for a novice athlete, I wouldn't have a problem foregoing the specific prep phase in order to get more strength and endurance work completed.

I tend to rely more on the bike for strength work, however I do like to include hill repetitions on the run as a neuromuscular stimulus throughout this phase.

Tried to comment the other day, don't know if it worked.

Thanks for the qu.

I'm curious as to what population you're dealing with. That may be the difference. I deal primarily with triathletes so most of my guys aren’t doing sprints from a standing start.

In answer to your qu, I would use the peak torque observed irrespective of rpm. Stone used similar % guidelines for weightlifting (which is about as low in an rpm/speed sense as you can get) so I think the same would apply for very low rpm activity.