The importance of strength to endurance 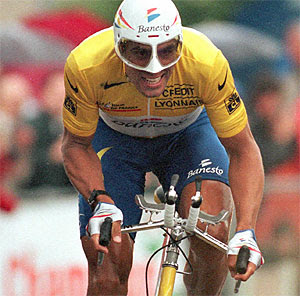 "When the body is strong, the mind thinks strong thoughts" - Rollins

When it comes to athletic training, a central thesis that I have developed over my years as a coach is that all athletes, from ultra-distance Ironman athletes to 100m sprint runners are, well, for lack of a better word, athletic.

In other words, while there are certainly individual differences that are clearly obvious across the sports, there is also a homogeneity in the fact that, as muscle is the precursor to movement, individuals who specialize in movement are fundamentally more muscular than ‘the norm’.

Sure, there are those athletes with tiny or lithe skleletal frames that get away with less obvious muscle. Tour De France climbing specialists come to mind. However, relative to their frame, (which is fundamentally fixed) athletes, on the whole have a lot of muscle.

Studies that express physique as a 3 digit ‘somatotype’ of ectomorphy (skinniness), endomorphy (fatness) and mesomorphy (muscularity) reinforce this fact that athletic subsamples from distance runners to hammer throwers all have a higher middle number (mesomorphy) than the general population. A visual representation of this from Fox et al. (1988) is shown below: 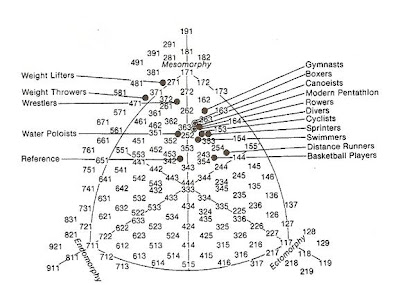 As you can see, somatotypes among the sample range from ~254 for the meso-ecto distance runners to ~471 for the meso-endo weight throwers to ~271 for the pure mesomorphic weight lifters. However, for all of these athletes, mesomorphy predominates, i.e. the middle number is always the biggest.

There is a very simple physiological reason for this: Muscle = Movement. If you want stronger or faster movement, you need bigger or faster muscle. If you want more watts on the bike, the absolute limiter is muscle mass. If you want these watts to be aerobic, then the aerobic quality of that muscle comes into play but it can’t be denied that if you want 400W, you need at least 400W worth of muscle.

From an aerobic perspective, studies have shown that each kilogram of aerobic muscle can take up ~160ml O2 (Schwerzman et al. 1988). Therefore for a large athlete, say a 175lber, to have an elite relative VO2max of 75ml/kg in a whole body exercise requires ~37kg of appendicular muscle mass!!

My own results from those athletes that I’ve worked with who I have both DEXA (anthropometry) data and VO2 data from the lab have tended to back this up. 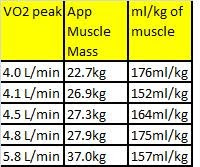 Athlete 1 is a relatively well-trained ectomorphic runner/triathlete of ~5’10, 155lbs.

Athlete 2 is a larger endomorphic novice-intermediate triathlete of ~5’10, 220lbs

Athlete 5 is a big, powerful mesomorphic front of the pack AG triathlete 6’3, 215lbs

There are some interesting, practical applications that stem from this data. First of all, the bigger the athlete’s chassis, the bigger their engine needs to be in order to perform well. Athlete 3 and Athlete 4 have a similar amount of muscle mass. However, there performance is markedly different. A large part of this is that while they have a similar size engine, athlete 3 has this engine in a big Chevy chassis, while athlete 4 has it in a smaller streamlined chassis. For a guy with a big chassis like Athlete 5 to attain a high performance level takes a huge engine!!

Additionally, while there are small differences in the aerobic ‘quality’ of the various athletes muscle, it’s equally clear that the overall trend is as peak VO2 goes up, muscle mass also goes up. It’s also both clear and interesting, when looking at the 5 athletes, while VO2 is clearly scaled to muscle mass, it does not appear to be scaled to stature. This is one of the key observations that has led me to adopt the viewpoint of symmorphosis, i.e. that VO2 will increase in response to functional demand rather than adopting the more traditional limiting viewpoint that some folks are born with a big heart and a consequent big VO2. The lack of correspondence between folks with big hands, big feet, big heads, big noses and big VO2 has led me to question this viewpoint. Big muscles on the other hand…..

As I’ve mentioned in previous blogs, a related unexpected observation that I’ve continued to witness in the field is that top athletes are able to produce quite high levels of max power output. It is rare for me to see a top AG athlete of average size be unable to produce at least 1000W in the field, even if this power band is never deliberately trained. Admittedly, these aren’t Cavendish numbers, however the power gap between these numbers and what I typically see from endurance trained MOPers (in the 600-800W range) can’t be denied.

When we look at the functional attributes of muscle, this begins to make sense.
Considering each kg of slow twitch muscle can typically generate ~50N/kg (Hakkinen,1989) an athlete with 40kg of appendicular muscle, say 30kg of which is in the leg will be able to generate ~1500N (~340lb) of force with legs full of slowtwitch fiber. If they were strength/power athletes full of FT muscle, for the same quantity they would be able to generate an additional ~300N/60lb.

If we accept the conclusions above, then clearly the next step is to suggest that training to make the aerobic (slow twitch and FOG) muscle fibers larger providing this doesn’t have an excessively negative effect on mitochondrial density is a worthy goal. Indeed, there is some research support that shows that total muscle mass in endurance athletes is correlated with VO2max, and performance in weight supported aerobic events (e.g. Kerr et al., 2007, Mikulic, 2008)

While you may argue that this is all fine and good for the weight supported events in a tri, i.e. swim and bike, don’t I need to be light to run well? Yes, the lighter runners with an appropriate muscle mass for their small frame will be the fastest runners but this isn’t your choice. When it comes to frame, you’re born with what you’re born with. An athlete with a larger frame who attempts to hit the same weight as an athlete with a small frame puts himself in exactly the same position as an athlete who puts on 10lb of fat during the off-season, i.e. a higher proportion of his weight (in this case bone) is not movement producing.

In conclusion, aerobic muscle mass is never a bad thing and for many athletes, the absence of sufficient muscle mass for their frame may be limiting. For this reason, appropriate strength training (with a focus on ‘aerobic strength development’ is an integral part of high performance endurance training.

I've done a few hillclimb cycling races over the years. At the last one, a mt bike hillclimb, I really left with a revelation about how important the strength component was to my performance in that sort of event.

I'm now planning a lengthy strength-oriented period for my bike training. Can't wait to hit my local hills on those big gears, and to get back to the hillclimbs.