Time for a lactate test? 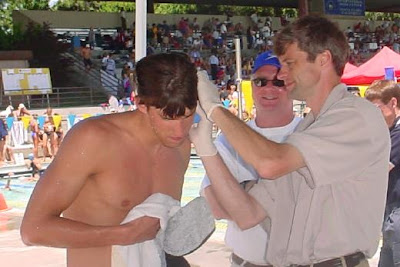 As we move out of early season base training into the athlete’s ‘specific prep’ period, I will often suggest that athletes get a lab test with blood lactate analysis completed. There are a couple of significant benefits to this type of test that make the 150 bucks or so that they typically cost worth it:
• Establishing individual training zones
• Determining ‘weak points’ that we can use to direct future training.

1. Establishing individual training zones.
The notion of using ‘zones’ to direct training has become a bit of a contentious topic of late, with some coaches asserting that the delineation of metabolic processes into zones is arbitrary and an over-simplification of the way our energy systems work together. While I would agree that the ‘90s saw us getting to a point where the creation of zones got a bit out of hand (at one point the Australian Institute of Sport used 9 of them), there are a few critical physiological points that need to be determined in order for the training to be at all effective.


The most significant of these is what we call the Aerobic Threshold. If you google this term you’ll see even more disagreement and confusion – Does this point consistently show up on a lactate test? Does such a physiological entity even exist, blah blah blah. Discounting the definitional problems, the practical reality is that when conducting a lactate test from a sufficiently low level of intensity, lactate will remain at a relatively low plateau through increasing work stages until a certain point is reached when it begins to rise. We deem this point the ‘Aerobic Threshold’.

The Aerobic Threshold has considerable practical significance as it represents the lowest intensity level at which aerobic energy supply is challenged. One might suggest that since aerobic energy demand is not challenged below this point that any training done significantly below this level will not disrupt homeostasis enough to elicit a training effect and is essentially a waste of training time. This has indeed been confirmed in studies that have looked at athletes who conducted very high volumes of training at low intensities (less than AeT). For example, 5.5hrs of ski touring a day for 8 weeks resulted in ZERO change in aerobic capacity of the muscle (Schantz et al. 1983). Therefore, knowing this point so that training can be directed at or above it is knowledge worth paying for!
Posted by Alan Couzens at 9:54 AM