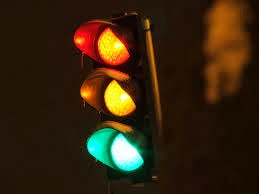 
One of the biggest challenges of ‘remote coaching’ is an inability to ‘eyeball’ the athlete on a daily basis. Thinking back to my days on the pool deck, assessing when a swimmer was too tired to benefit from a session was much easier than it is these days. It didn’t necessarily need to be quantified. It was made clear in changes to the swimmer’s ‘every day’ stroke that a coach gets to know so well after watching arm cycle after arm cycle over months and years of preparation.


When it comes to preventing over-training, swimming benefits from the fact that it is a technical sport. The movement is sufficiently complex that tiredness “shows up”. Additionally, swimming programs typically involve a mix of intensities in any given workout. This too, makes fatigue evident. Training for Ironman triathlon, on the other hand, as a less complex/less intensity-diverse endeavour, can be quite a bit more challenging both in terms of assessing and heeding the signs of day to day tiredness in athletes. This is exponentially true when coaching is remote.


In this piece, I want to take a look at overtraining, especially among high volume Ironman athletes. I want to first offer a practical definition of overtraining and then outline some simple signs that both coaches and athletes can use to determine when “enough is enough”.


So what is over-training?


The term ‘over-training’ has come to mean different things to different people depending on what side of the issue it’s being approached from. The sports medicine community is generally concerned with The Overtraining Syndrome – a serious chronic ‘injury’ to the hormonal systems of the body that can severely compromise overall health and take months or even years to recover from.


The sports science community, due to logistical and ethical issues in eliciting the overtraining syndrome has focused more on ‘over-reaching’, i.e. training to a point of diminished performance. While investigating this, researchers have often been forced to conclude that often this over-reaching is actually functional and is a common thread in sufficiently demanding training programs. And so, in coaching practice, the definition of overtraining has remained a little nebulous & of limited practical use.


As coaches, we are concerned with providing & implementing programs that result in athletic improvement. Overtraining, then, can be more broadly looked at as occurring when the amount of training and the amount of improvement are out of whack. In this sense, the athlete is literally “over training” for the results they are receiving. While this is an easy enough concept to grasp, assessing it in the real world is a little more challenging.


Rarely, will we, as coaches come across athletes suffering from the over-training syndrome – where stress hormones are clinically affected and the athlete’s long-term health is at stake. Frequently, however, we are charged with the task of managing fatigue, i.e. deciding how tired is ‘tired enough’. Instead of obvious ‘red lights’, we’re much more likely to come across semi-frequent ‘yellow lights’ – indicators that the athlete is getting tired but can still complete the training - where it’s very much a judgment call as to whether we should hit the brakes or roll on through. If you’re of the same mindset as the bulk of morning drivers that I seem to share the road with, you may be asking “why not roll on through the yellow lights?” After all, we’ve got to get to our destination. The reason is that, when these warning signs show up, the athlete’s training response is already compromised, i.e. while he/she can still do the training, the performance benefit that they get from the training is not the same as when they are relatively fresh.


Studies are consistently finding a link between fatigue and the degree of training response. For example, Hautala et al., (2003) found that athletes with a low standard deviation in heart rate variability (174 ms) – a measure of high autonomic fatigue, improved their VO2peak by 12% less than subjects showing low autonomic fatigue (HRV of 195 ms) on the same training program! That is, while all athletes were adapting to the program to some degree (none were meeting the clinical criteria for over-training) some were just adapting better & faster than others – specifically, the ones who had the lowest daily signs of fatigue. These athletes were, on any one day, getting more performance ‘bang’ for their ‘training buck’. Given that all athletes are limited in one way, either through time or energy, this training ‘return on investment’ is important to maximize.


When athletes consistently train in a fatigued state, the following pattern of a progressively lessening return on investment occurs – 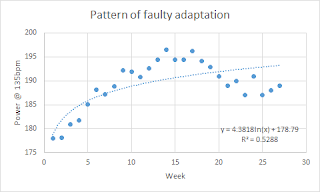 Despite continued loading, the improvement rate plateaus or even regresses late in the season and the benchmarks begin to fall away from the improvement trend. However, by the time that this trend of compromised adaptation becomes obvious, it’s often too late to turn the season around. Instead, we want to identify some daily ‘yellow light’ predictors that are closely linked to this pattern so that we can take short term (immediate!) action to keep the training response ticking forward at the optimal rate.


The best coaches that I’ve seen in action do this intuitively, i.e. like an experienced chef, they determine whether a pinch or a dab is more appropriate to the recipe that day by drawing on an extensive experiential database of indicators of fatigue for each given athlete. While this obviously represents the ideal, science is also putting together its own database of tests that consistently indicate autonomic fatigue and blunted training response & can be of great value to remote coaches & those without a decade of experience with an athlete in determining 'how much is enough'.


In next week’s article, I’ll take a look at some simple daily tests that can keep this training response in the ‘sweet spot’ & tell the athlete whether it’s a red light, yellow light or a ‘green light GO’ kind of day.
Until then…

Nicely written! Particularly interesting in light of Joe Friel's current articles on aging. As an aging athlete, I suspect I'm going through more yellow lights than I used to. Looking forward to part II.

Great point on training response being all the more important as we 'age up'. Our bodies, on the whole, become less 'anabolic' with age and demand more active facilitation to continue to grow in response to stress.

This 'active facilitation' (i.e. being very pro-active with recovery strategies) seems to be a common thread in the older athletes I know who continue to perform at a very high level. Without it, those yellow lights become all the more frequent :-)