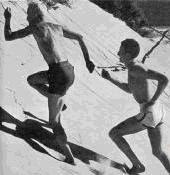 The pic above is of one of my all time heroes, Aussie track coach Percy Cerutty, leading one of his charges, a young guy by the name of Herb Elliott (who went on to hold the world 800m record!!) up one of the sand dunes that made up Percy’s ‘international athletic center’, in reality a couple of shacks on a beach in Portsea, Victoria.

Percy’s athletics was backed up by a fundamental philosophy that resonates loudly with me. He even had a name for his philosophy and accompanying code of conduct. He called it the STOTAN code. The word stotan is a composite of two words:

Stoic: A philosophy based on deriving pleasure from virtue and being unmoved by necessary hardship.

Spartan: An ancient greek culture based on loyalty, discipline and acting for the greater good.

I have had some recent conversations with Gordo that have forced me to look at what motivates me both as a coach and an athlete and I keep coming back to these principles.

I recently had an athlete put in a breakthrough performance and qualify for Kona. Of course, I was eagerly watching the web on Sunday, checking out his performance and I knew he was on the verge of something special. When he finished the race, I was excited to know that he was on the cusp of a Kona slot, and even more excited the next day to hear the news that he had secured one. But the real ‘lump in the throat’ moment for me came when I read his race report and realized just how much tenacity he showed out there, how deep he had to dig and how far into himself he had to go to reach a level he had never reached before. A level of athletic achievement? Yes. But it’s more than that, to me, in a lot of ways, it is those moments of pushing your previous limits that personally define us.

When Gordo asked me why I was in the sport, my initial knee-jerk was “to get better, to improve my performance.” But, the more I think about it, the more I realize that, while I want to get better, in the end, the thing that keeps me going is, as Pierre De Coubertin suggested, not the triumph but the struggle. It’s a weird thing isn’t it? But it’s almost common for athletes, especially truly great athletes to have a penchant for “the hard way”. If my time in Aussie swim squads taught me nothing, it taught me that the smile that creeps over the coach on pool deck often has nothing to do with faster times for a set or the thought of a possible medal at the next meet, the smile is all about those principles that I mentioned above; an inspiring display of loyalty, discipline and athletes who are unmoved by the necessary hardship of athletics.

On the surface, there is obviously a certain joy that comes from knowing that you are doing something that others aren’t willing to do. On the deeper level, I think that this emotional satisfaction stems from something that the Eastern religions realized long ago, that to become an individual with a soul, a spiritual entity independent of our brain and material shell, occasionally we must act independently of them. We must do things that challenge our body, we must do things that challenge our rational thoughts, e.g. jump on our bikes and ride 5hrs up a mountain despite the fact that we know rationally that with a base of 2x1hr trainer rides a week, it’s probably not a smart thing to do :-), just to prove that “I” am more than my rational thoughts. For whatever reason, call it God, call it destiny, call it whatever, some cosmic force has determined that “I” am an athlete.

It is also probably fair that I let my athletes know that this is also what motivates me as a coach. Of course I want you to get better. I want you to achieve your athletic goals. I want you to get healthy. All of that. But I also want you to experience those moments where you bust through your own self concept. Those moments of self-control and fortitude that show you that you are so much stronger than your emotions and your whims. You are so much more. Every time you complete a basic week. Every time you get out of bed and get ready to train as soon as your alarm clock goes off. Every time that you hit the supermarket instead of hitting Mickey D’s not only makes me proud of you as an athlete, it also fulfils me to know that I am helping you discover a self that is independent of your thoughts, your whims, your cravings. I am helping you discover your true self. In answer to Gordo’s question…. THAT is why I am a coach.

In retrospect, the title isn’t totally apt, I’m not calling all Stotans, just one :-) I have one slot left for coaching over the next year. If what I have said strikes a chord, drop me an email.

Also, I just headed over to my buddy Chuckie V's website and he posted an awesome blog along a similar line. Talk about cosmic force!!
Posted by Alan Couzens at 4:16 PM

Wish you were here at camp.

The snack room needs some leadership. :-)

Any comparison to Chuckie is absolutely welcome :-)

Great post!! If I ever grow up I want to be a STOTAN.