I was watching the Karate Kid yesterday. It’s been a while since I watched that movie and I must say that viewing it this time through the filter of a coach was a little different experience – that Miyagi knows his stuff! 

I thought I’d open with one of his gems from the movie. So true. I’ve already written a number of blog posts along a similar line, i.e. you must first get fit before you get fast. I have outlined just how much time some of my mentors in the swimming world devote to building their swimmers aerobic engines before any thought of adding “speedwork” to the program.

As an aside, from my own experience, I recently had my best aerobic run test since coming back from my hip fracture last year (7:36/mi). Still, by no means a ‘rock star’ number, actually probably not even worthy of ‘band geek’ status, but for me, this is still a solid improvement - down from 10:00/mi in December. How did I improve 2.5mins/mile in 6 months? Speedwork? A 10% volume increase each week? Nope. I have been doing the exact same week, week after week for the past 6 months. A basic week consisting of 3.5hrs of aerobic running (~30mins a day) week in and week out. And, I might add, 6 months in, doing the same thing, the improvement keeps coming. It may not be exciting, but the Romans were spot on, when they drilled into their students Repetitia mater studitorum est (repetition is the mother of study).

But, the inspiration for this blog doesn’t come so much from my own training experience as it does from a conversation with elite triathlete and EC coach, Justin Daerr (pictured below) at one of our recent EC camps. 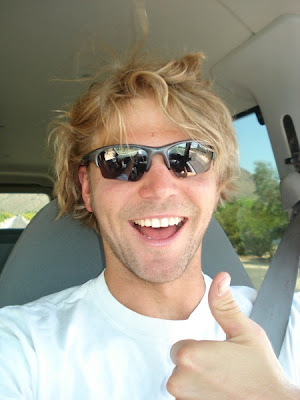 JD was pointing out to me how he felt that he was lacking top end horsepower based on some of the impressive numbers that some of his competitiors are able to throw down on Functional Threshold tests. The conversation was very familiar to me. Usually it is coming from a novice triathlete who has picked up one of the latest “8 weeks to an 8hr IM program” (I’m only slightly exaggerating) that asserts that intensity is the ticket to breaking through to the next level. I’ve heard it so many times that I pretty much go on auto-pilot with my standard response, i.e. if exclusive aerobic training is good enough for a nationally ranked Aussie swimmer (whose event is 1/100th the duration of yours), it is good enough for you. But, this time I was a little taken back. Surely there comes a point for the elite athlete in which it becomes prudent to push the top end. In a round about way, I got the impression that JD was interested in if he was at this point.

Those of you who are familiar with this blog will no doubt be aware of my penchant for aerobic training as the basis for fulfilling your potential as an endurance athlete. However, those of you who are able to read between the lines will also recognize that I have a strong preference for the development of balanced athletes. JD and I half-jokingly call it “Maffetone with a twist” When I talk balance, I’m not talking ‘Daniel-san standing one legged on a beach pillar’ balance, no, I’m talking about having balanced development across the aerobic spectrum and across all fiber types. So, from a physiological perspective, what does a balanced elite IM triathlete look like? What is the relative importance of things like VO2max, Functional Threshold Power, Maximal Fat Oxidation etc etc. From JD’s perspective, what sort of FT #’s are required in order to be a world class long course triathlete? Or, put another way, what physiological qualities are truly limiting the 8:30 to 9:00 athlete from becoming an 8:00-8:30 athlete?

Tim Noakes provides an interesting side bar in the latest edition of Lore of Running that outlines why an 8:xx IM is a ‘metabolic impossibility’. He points out that for Mark Allen to run a 2:40 marathon at the end of an Ironman would require Allen to oxidize fat at a rate of 1.15g/min (~10kcal/min). He also points out that the highest fat oxidation rates that they have observed in their laboratory (primarily studying elite distance runners) is 6.8kcal/min. In our own lab, the max we have seen is 8.1kcal/min. However, we haven’t tested someone with the IM pedigree of Mark Allen yet!!  Based on the numbers, at the 19kcal/min point (the energy expenditure required for a 155-160lb guy to run at 2:40 pace), Allen is getting more than 50% of his energy from fats!!

In practical terms, there are a couple of other considerations:

- Tactics: While supposedly an individual time trial, in the elite race there are times that it will be prudent to exceed the 50/50 point in order to bridge to/stay on a group on the swim or bike or make a tactical move on the run. For these reasons, a functional threshold in excess of the bare minimum may be desirable. Generally though, pacing the race in accordance with your own physiology will ultimately lead to the fastest time and the best race result.

But, for the sake of argument, let’s give our hypothetical Kona winner an extra 25W on the bike and 10s/mile on the run. Even with these buffers, this gives us a relatively pedestrian FT of 325W on the bike and 6:02 on the run. There are a good # of elite triathletes around the country who fit the bill and thousands of collegiate cyclists and runners who can put out these #’s in their sleep.

Based on the literature that I have read and the athletes that we have seen in our own lab, I could count on one hand the # of athletes in the world who can oxidize 10kcal/min of fat at any point along the performance curve, let alone at race pace.

Gordo’s latest curve is shown below: Make no mistake about it, this is a ‘Rock Star’ curve. For most folks, even very good AG athletes, fat oxidation (in black) will completely shut down in the mod-hard zone. For G, you can see that his fat burning continues, not only into his ‘threshold’ zone, but beyond it. In other words, even when G is accumulating lactate quicker than he can get rid of it, he is still efficiently burning fat!!
The other very cool adaptation that we see on this curve is that in the Mod-Hard zone, his total efficiency kcal/watt actually improves, i.e. the energy expenditure flattens out. G is more efficient at 250-275W than he is at 225-250!!

Still, while ego inflation is not a bad bonus to doing a lab test with EC, most folks are more intererested in their weak points or limiters.

For G, his critical window at which he is oxidizing less than 10kcal/min CHO occurs at ~250W on the bike. Based on Noakes equations and based on other power data that I have from elite Kona competitors of similar weight, to be competitive in Hawaii, this point must move into the 280-300W range, or 19-20kcal/min. Doing the math, this necessitates an ability to oxidize fat at 9-10kcal/min (consistent with Noakes suggestions about this being the differentiating factor for world class IM athletes).

While, it would be nice to see G add another 25W to his FT, this isn’t the biggest physiological limiter at this point. Even for someone who puts A LOT of conscious effort into improving his ability to oxidize fat (both nutrition and training), this area still provides the greatest ‘upside’ for him. Imagine what a dedicated focus on this could do for the rest of us!

I may throw JD’s curve up there pending permission. I guess I take G’s implicit permission for granted as he pointed out in his last blog :-)
Posted by Alan Couzens at 10:19 AM

AC,
You're a rock star in my book, though, to be honest, I'm still unsure what I'm actually going to name my book! Another great write up and one I'll be referring many a folk to.

Alan,
Can you direct me to some nutritional resources that you have personally found beneficial?

The book "The Paleo Diet for athletes" is probably #1.

Paul Chek has some great general nutrition articles on his website:

ditto for the mercola site:

Thanks AC! Congrats BTW on the rapidly improving fitness.