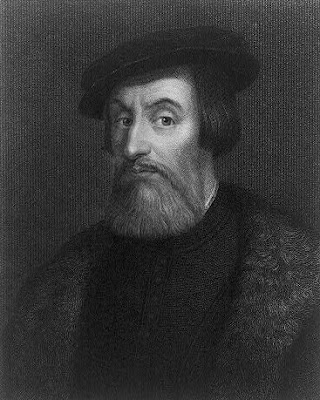 The pic above is of Hernan Cortes. Cortes’ greatest claim to fame (at least from my perspective) was the famous incident at Vera Cruz, when, during his attempted Mexican conquest, after landing on the shore with his armies and hearing of the might of the local ruler, Montezuma, he made the decision to eliminate any chance of retreat by burning his army’s ships.

The word decision comes from the latin roots ‘de’ meaning ‘from’ and ‘caedere’ meaning ‘to cut’. In other words, making a true decision means to physically cut yourself off from the possibility of failure.

Do not fool yourself, we all have limits to our will power, as Gordo points out in his latest blog. It is not superior willpower that separates champions from the rest of us. I spent a good amount of time with the Aussie national swim team when I was back in Australia. Like any sample of society, there are a number of different personalities within the team. Some are “hard” as a rock, completely unyielding, thinking about swimming and their goals for the sport 24-7. Others are more ‘soft’, more ‘yin-yang’ athletes, a balance of ‘get down to business’ attitude when they hit the water and ‘regular guy time’ when they hit dryland. Personality is not the distinguishing factor that separates those who make it from those who don’t. So, what does separate achievers from non-achievers? Achievers put themselves in a position to make habits of the things that failures won’t do. To be real, in the world of swimming, it is often not the athlete who must summon the daily willpower to make these decisions.

I never really ‘made it’ as a swimmer. I was an above average local swimmer. I’d pick up some medals at local meets. I made a couple of representative meets but there were certainly other swimmers in my own squad that were at that next level. Some went on to make the Aussie national team. When I look back to what the difference between them and me was, I am forced to conclude that the biggest difference wasn’t in their own obsession for the sport. Rather, these athletes had parents that were OBSESSED with the sport. On occasion, when one of these swimmers put in an effort that was deemed to be ‘sub-par’, I have seen his mother slap the kid across the face when he got back from his race. When I started coaching elite juniors in Sydney (8-12 year olds that were the superstars of tomorrow) this level of parental ‘commitment’ was no longer the exception, it was the rule.

Now, I want to make clear that I am in no way condoning corporal punishment, especially in this circumstance. However, I do want to say that in some ways I wish that my parents would have pushed me more to stick to a commitment that I made.

This reminds me of the story of world record marathoner Toshiko Seko. After a particularly tough stretch in (his coach) Nakamura’s training camp, in which Nakamura put Seko on a diet of a piece of toast and a piece of lettuce each day (notably, in an effort to lose the weight that he had put on after spending some time in the US college system), Seko broke and ran home to the perceived security of his parent’s abode. When he got there his parents closed the door on their son. The sent him back to Nakamura with a message “Do whatever you must with him: He’s yours”.

OK, so maybe we aren’t all willing to make those decisions; to convince one of our family or friends to beat us up every time that we don’t make a performance benchmark or to live on lettuce and toast in an effort to lose a few pounds, but the point remains that the laws of cause and effect apply to us all and that if you are not receiving the results that you want in your life, it is because you have not made the decision to put these causal, environmental factors in place.

A true decision is marked by a physical action, the physical action to, all extents possible, block off any source of retreat. This may mean throwing all simple sugars in your home in the bin. It may mean selling your car so that you are forced to commute by bike. It may mean joining a masters swim program so that you have a social burden to show up to your swim sessions. Whatever the action, it is important to note that we live in a society in which retreat is both easy and, to some extent, expected (think divorce rates), and in which a decision, like a New Years Resolution is rarely worth the paper it is written on (if indeed we even get to the point of writing it down). It is not a true decision until it is backed up with massive, immediate action.

I appreciate the kudos, esp. from someone who is living it.

Great post man. I am gonna let this digest a little bit more over the next few days, and I am sure I will appreciate it more.

As I was reading the last paragraph: "it is important to note that we live in a society in which retreat is both easy", I was thinking about the divorce rates, and what do you know - that was your next sentence.

I just finished WF long course, and my next race is IMLP (my 1st IM). This post definitely can help with keeping the correct mindset for the next 2 months.

Sorry, Alan, you lost me when your argument turned on the "advantages" enjoyed by victims of unmistakable, uncondonable, child abuse.

All those who commit common battery should be expelled from sport, and indeed be permitted the "advantages" of experiencing the criminal justice system.

I'm distinctly not asserting you believe any differently. If you feel I'm committing a straw man fallacy, let me know.

Corporal discipline is not a necessity nor a common thread. Discipline in some form, however, is.

Alan, please keep writing. You've certainly "made it" as a writer and I suggest you, me and Gordo co-writing a tome. (Poor writing there, but hey, who's reading, right?)

I'm certainly up for it. IMHO there's too much watered down crap out there. It's time for triathlon to get it's own Lore of Running. I think we're the men for the job!

A I like your stuff but think you may be missing the point of extreme (olympian) athletic performance. It has to be done either through the personal route (talent, motivation, mentoring, coaching, performance)or by giving up your identity to someone else such that they dictate what you do (talent, deconstruction, programming, performance). Both will succeed the former being less reliable. The difference is the end product either people with self determination (internal locus of control) or people with burnout and mental health issues (external locus of control). But of course I generalise

I like the general tone of this piece...hard ward and dedication will out. you do what you have to do to get it done....very STOTAN. However, remember "THE HUNT FOR RED OCTOBER" the captain turned off the safeties on his torpedoes and they came back to bite him in the ass. Point being overcommitment can be just as big a problem as undercomitment. I think that where balance comes into play. There is a happy medium between OCD and Apathy and in there you can find success.

And as a side note I would pay upfront for book the 3 of you write, all very talented writers.

Cortes was one committed mofo.
It's easy to find a reason to leave a few ships behind every day. I've yet to burn my whole fleet, but I'm torching them one at a time.

Had an interesting conversation with the girlfriend about "hard" coaches and the difference between making a conscious decision to be a part of a hard program vs. being forced into one as, basically an alternative to daycare (as was often the case when I coached). I agree that one is a recipe for learned helplessness.

On the other hand, choosing to consciously contruct your environment and the people in it to the point that they supercede your will at any given point is about as "in control" as you can get.

It's funny, I started swimming young (in Australia) and have said many times, I wish I was pushed more by my parents. My swimming 'career' really got started about 5 years later than it should have...and as a result I really missed the boat (so to speak).