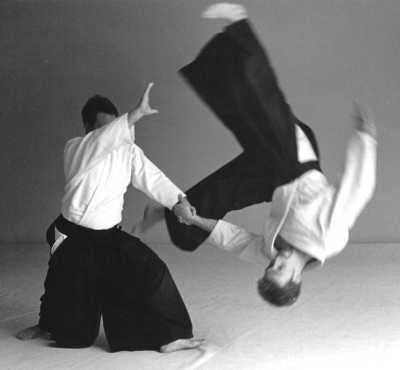 “The visionary lies to himself, the liar only to others”
- Friedrich Nietzsche

It’s 5:30 am on a Sunday morning and I find myself lying on my back, wide awake, with my world spinning. Surprisingly enough, my foggy head this time isn’t the result of a bike crash concussion or a big night on the town (Vegas is next week, folks! :-) Nope, I’m lying on my back with my head spinning after Sensai Gordo Byrn took me down in an Aikido match.

I am very accustomed to arguing. In fact, on some level, I really enjoy it. It may come as a surprise to those who know my introverted tendencies to know that I was on the debate team back in high school. In fact, it wasn’t just a case of being ‘on the team’, I hope it’s not too conceited of me to say that back in our day, we kicked ass (quarter finals at State ass to be specific :-). Anyhow, point being I have no problem drawing a line in the sand when necessary and not backing down.

On most matters, I think Gordo and I see eye to eye. In the world of elite athletics, if you talk to enough people at the top you begin to realize that the commonalities far exceed the differences. Recently, however, you may have noticed a, somewhat antipolar viewpoint in the matters of ‘hard vs. soft’ approach to goal achievement and, more significantly, the topic of athletic potential. It has always been my stance that endurance athletics is largely an area in life where you get what you deserve. Recently, I have noticed a departure in the G-mans philosophy, away from this stance (to be frank, I have a feeling that I may have been unintentionally instrumental in this departure, but that is beside the point).

The short point of my metaphorical introduction to this morning’s post is simply this – the Gman got me thinking.

In and of itself, this is no small feat. If you’ve been unfortunate enough to bear witness to some of my online forum debates with one or two of the well known sports scientists out there you’ll know that my general way of War, my Big-A-Do :-), if you will is, when someone pushes me, I brace myself, strengthen my position and push back ten times as hard. With the appropriate firepower, this is a great way to win an argument, but not a great way to grow. By contrast, Gordo has a knack of using your own energy against you and leaving you on your back, with your head spinning, reconsidering your approach (hence my long winded Aikido metaphor).

In this situation, my head is spinning with the question “do I show potential?”, or on another front “am I getting what I deserve out of what I am putting into the sport or am I ‘fooling myself’? I also want to challenge myself and you all by pointing out another way that as triathletes we typically ‘fool ourselves’.

I have had 3 times in my life where I would (now) consider myself relatively ‘fast’ as an endurance athlete (interestingly enough, in at least one of these cases, at the time I considered myself distinctly ‘slow’ in relation to my peer group. Relativity to your peer group is huge as Mat pointed out a while ago in his piece, ‘Fast in Indiana’.)

The first time was when I swam 18:03 for a 1500m Freestyle back in 1992. Not surprisingly, in the context of Australia distance swimming, at the time relative to my squad members, this felt ‘slow’. Funny how things change. Right now if I could get back to that form I’d be one of the first swimmers out of the water in most of the local races, even out here in Boulder.

So, what was I doing at that time that set me up to swim that ‘fast’? I swam this time toward the end of our summer break in 1992. At the time I was riding my heavy ‘Old School’ road bike 40mi a day to get to and from my morning and evening swim practice. I was swimming 5-7km in the morning and another 5-7 in the afternoon.

The fastest that I have been on the bike was 58min for a hilly 40K Time Trial back in 2003. It was a pretty solid course that I would do each week as a benchmark ride. I was consistently under 1 hour. At the time, I was also doing some training rides with the Division 1 University cycling team. I was placing top 5 in their weekly Time Trials and was holding my own on the weekend group rides.

At the time, I had just broken up with my wife and cycling was my outlet. In a 3 month period, my smallest week was 313mi, my biggest was 404mi. I would regularly ride my bike from Gainesville to Orlando (~120mi), crash at a Days Inn near Disney World and then ride back the next day.

Still a little psychologically screwy, after getting injured (meniscus) after my big bout of cycling, I threw my energy into two things:

a) Running a lot
b) Losing weight.

I certainly don’t present my past as an example of what to do. I have made a lot of errors along the way. However, I do present it as a bit of a reality check on the sort of volume that decent single sport athletes are doing. While my mind-set may have been a little different to the folks around me who were finishing at about the same time, I assure you my training volume wasn’t, 50-70mi a week isn’t anything ‘special’ to a runner. 400mi a week is pretty standard for a Cat 2/3 cyclist and 70K a week in the pool is nothing for a decent club level Aussie swimmer.

Of course, the challenge as a triathlete is to find the space in your life and the energy to do the requisite training volume. However keep in mind that even for you, as a triathlete, doing the work in all sports is a requisite. The notion of ‘cross-training’ is B.S. If you want to run like a runner, you must run like a runner, If you want to swim like a swimmer…. Well, you get my drift.

Sometimes as athletes, I think we (want to) forget these realities. Fool others, by all means, but whatever you do, don’t fool yourself.
Posted by Alan Couzens at 6:38 AM

One of those posts that I had to write for me.

I'm glad it struck a chord.

See you out there.

Great post.
Potential is a tough one to nail down. Tough to really know when it's been reached. Great to talk about though....
I've stayed at that Days Inn near Disney. They double charged my Visa card. :)

I'm not sure that triathlon would be as much fun if we were able to 'nail down' our potential off the bat.

Actually funny story about staying down near Disney. My girlfriend and I were down there for Tri-America one year and it got cancelled due to a hurricane.

Bored, out of our brains, we decided we wanted to go for a run. As you know, running opportunities down there are limited so we decided to try Fort Wilderness. Turns out it was gated with security etc. Anyhow, security guard asks us our name. So I try the bluff. Fortunately, there was someone with the same last name staying there!

Long story short, security guard names us Bob and Judy for the day but we got our run in :-)

One of the only good things about not starting IM distances until your 42 is that your only going to get better. Unless you get hurt or something.
I'll never really know how good I could have been had I started this back when I watched the 1st IM. Nor do I know how good I can become if I just keep plugging along. But when I'm a real old fart I will be able to look back and see when I hit my peak at all of my endevours. You do what you can do, that's all you can do.
It has to be one of the toughest things for an athlete as he or she gets older and realizes their best is behind them. The idea of being a "has been" is so harsh. Since most of us are "never were".

Alan,
great stuff. Does your post speak to the claim one may make with regards to a lot of mediocrity in triathlon?

The sport/industry has done a marvelous job of selling the life-style of triathlon and I think it is very very positive. But athletically, who's kidding who? Unless that's all one does and even then, like a majority of endurance athletes out there, they're probably training ineffectively, i.e., too hard!