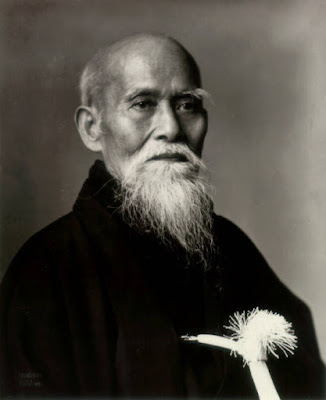 In keeping with my aikido theme of last week, I thought I’d open with a pic of Aikido founder Morihei Ueshiba.

One of the things that I love about Martial Arts is the long term discipline required/expected when a new student enters the dojo for the first time. It is not uncommon for a judo student, for instance, to spend a year simply learning how to fall, before even a thought is given on how to go about instigating a throw. In the more legitimate schools, obtaining a black belt is a ten year deal!

On a spiritual training level, in my mind, it is this ‘patience training’ that makes martial arts so valuable to the individual in terms of dealing with the fact that success in the modern world is largely the result of sacrificing short-term wants for long term gains. Unfortunately, this mind set hasn’t trickled down to all sports. In the world of AG triathlon, for instance, the “I have 16 weeks to qualify for Kona” mind set is all too pervasive.

Another sport that does a good job focusing on the long term development of the athlete is swimming. My first job out of college was with Jones Aquatic Club in Australia. To this day, that short period of time in my life has left a significant impression on me. Let me paint the picture for you: A small, somewhat dingey indoor 25m pool bustling as a production line for the next Aussie swim superstars. In a 6 lane, 25m pool, every square foot was utilized in a mechanistic schedule that was running as smoothly as any Henry Ford production line ever did. The first 3 lanes were split in two, making for 9 ‘levels’ of swimming development. Each of these levels was denoted by a little colored token that the kid received when they checked in for the day. Once a child performed all of the (very specific) session criteria perfectly, one of the supervisors (that was my job), handed the kid a colored token indicating that they had been ‘promoted’ to the next level. It never ceased to amaze me, the joy that a small, inanimate token could bring to these kids. They would compete with the ferocity of an Olympic champion for the recognition of being the ‘kid who got the token’.

Of course, this method is paralleled in the Martial Arts, where the student’s long term development is broken up into a number of colored belt levels. I may be losing the plot here, but I have a sense that doing the same in any sport that requires a decade or more of commitment to truly realize your potential could only enhance long term motivation.

In keeping with my overall philosophy that if you want to train more or train harder, you must first prove it by training/racing faster, here are my virtual belt rankings from my own triathletic dojo :-) The following are my criteria for moving to the next level in running (similar criteria can be given for swim and bike training). I have derived these criteria from a number of sources (e.g. Daniels, Glover and Glover, McPhee) along with my own experience in working with athletes of a range of ability levels.

White Belt: All newbies come in as a white belt. In order to move up to a yellow belt they must achieve the following:

Black Belt:
- A 50mi (flat) run week in less than 6:30 including:
- An 11mi long run in less than 1:30
- 6x200m strides in less than 42s/200
- 8x400’s @ 3:30 w/a 400 jog in less than 1:26/400
- 4x1200’s @ 9:00 w/a 800 jog in less than 4:30/1200
After completing the ‘black belt’ program, the athlete is ready to move on to studying a specific school, e.g. Ironman training. This is not to say that athletes cannot complete an Ironman before reaching their black belt, however, in my mind at any belt level below black belt, the athlete is in a position to complete, but not compete.
This is an important distinction. It is also important to note that completing too many very long events during the athlete’s formative development will ultimately delay the point at which the athlete can begin to compete in said events. At the extreme, this can result in athletes who put in big volume but are never truly competitive as AG athletes because they lack a balanced development (but that sounds like the subject for another blog post)

Hope you’ve enjoyed my musings for this week.

Keep your focus, but keep it fun!

Sensai A,
Another masterpiece. I bow to you long time.

Glad you shaved the Mohawk before bowing (you could have poked my eye out ;-)

"It is also important to note that completing too many very long events during the athlete’s formative development will ultimately delay the point at which the athlete can begin to compete in said events. At the extreme, this can result in athletes who put in big volume but are never truly competitive as AG athletes because they lack a balanced development (but that sounds like the subject for another blog post)"

I'm especially interested in hearing some thoughts on the "balanced development" ideas.

BTW - I enjoy the martial art analogy. TaeKwonDo was my first attempt to fully invest myself into a sport as a child. And as you mentioned, we learned discipline and concept at least a couple years before we got into anything overly demanding physically.

I have tried to study TaiChi at two times, but to be honest, I get frustrated by learning only one move a week (or less). And as to your analogy, I wonder if that has been displayed in my Ironman development?

Ask and you shall receive :-)

As to the general before specific preparation, I think this last post does a better job of laying out some specific numbers that might define a habitual "plodder"

In a general sense, developing all training speeds, and for that matter other biomotor abilities (strength, basic endurance) in your formative years as an athlete will ultimately set the limit of how far your specific preparation will take you. Definitely something to consider before making the distinction of becoming an Ironman vs. a plain old triathlete (not as sexy in the short term but better for your ultimate performance in the long term).

AC,
Since nutrition and body comp can be a limiter for IM, what do you think about adding body composition to your IM development milestones? What do you think would be target percent body fat for yellow, blue, black belt?

Also, I'm guessing an athlete in his forties or fifties may need a different definition of what it is to be a yellow, blue, black belt. Would you adjust your criteria for someone who started IM development in their late 30's?

AC,
Since nutrition and body comp can be a limiter for IM, what do you think about adding body composition to your IM development milestones? What do you think would be target percent body fat for yellow, blue, black belt?

Also, I'm guessing an athlete in his forties or fifties may need a different definition of what it is to be a yellow, blue, black belt. Would you adjust your criteria for someone who started IM development in their late 30's?

A couple of really good points!!

I find the addition of a qualitative aspect to the developmental criteria provides a really good signal for when it is prudent to focus on other (less fun) non-training stuff, like diet etc. E.g. if you're training 15hrs p.w. and still unable to break 5:30 for a half, then there may be issues independent of training volume to consider - e.g. body comp.

The age factor is definitely something to consider when making these arbitrary 'cut off points', the older the athlete, the more reasonable it is to think that a higher training volume will be necessary to reach a given performance level.