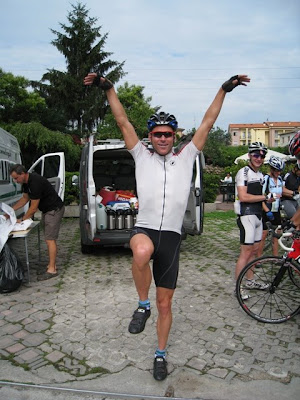 No, today’s blog isn’t about that kind of balance. The balance that I am talking about in the title of today’s post is the balance across the training intensity spectrum.

But, before I get into that, Mat has written a great post this week on some of the limiters to Ironman performance that, as athletes we often fail to/don’t want to consider (e.g. day to day nutrition…Sugar addicts stand up! :-) Check it out - http://msteinmetz.blogspot.com/

In his post, Mat talks about the components of fitness. I want to explore that a little more in my own post this week.

In my mind there are two schools of thought on preparation for Ironman racing. On one side of the fence we have the following basic theory of training:
Position 1: Raise the athlete’s functional threshold to the highest level possible - since functional threshold is the best predictor of athletic performance in all aerobic events (yeah, right!) then make sure the athlete paces the race at the appropriate % of this functional threshold. If the athlete races under what their functional threshold # would indicate, it is clearly a pacing problem.
I hope you feel the sarcastic tone in the above paragraph. This myopic viewpoint of training really bugs me on a pretty deep level and the fact that there are a number of PhD’s (often in unrelated fields) out there espousing this viewpoint right now, bugs me even more. Excuse my grumpiness this morning. I’m a little undercaffeinated :-)

I want to point out that I have a strong lean (almost to the point of falling over sideways) toward this position. However, recently my experience in coaching and testing athletes has led me to reach the conclusion that despite the fact that 80% of the Ironman field would benefit from simply doing more, there is a select portion that is distinctly lacking in the top end abilities required to reach the next level of athletic performance.

I also believe that this 20% or so is growing as more and more people are selecting “training for an Ironman” as their first foray into triathlon training (or their reintroduction after a long lay-off) without following the natural progression of sprint tri, Olympic tri, Half Ironman followed by an Ironman several years into their triathletic development.

It can be very difficult for an athlete to determine how much ‘top end’ is enough? Folks like Gordo perform at the elite level of Ironman racing with, what would be considered, relatively pedestrian values of functional threshold, and especially, VO2max (within his elite peer group). However, I’m willing to stake a guess that Gordo’s functional threshold is higher than yours! OK, so you’re not looking to challenge Gordo at Vineman or even your age-group winner for that matter, but the question remains are you lacking in top end horsepower?

More numerically inclined exercise physiologists have been trying to equate relative performances over various race distances for years. Folks from Gardner and Purdy (1970), to Tom Osler (1978), Davies and Thompson (1979) all the way to Daniels and Gilbert’s famous VDOT tables (1979), have looked to equate a given VO2max value with performances from 800m through to (and in some cases beyond) the marathon. For the most part, these tables do show a relatively high predictive validity within this race duration spectrum. This makes a lot of sense when we consider that the relative ergogenesis of these events consists of an aerobic (glycolytic) contribution ranging from 80-99% (Hawley and Hopkins, 1995).

However, when put into practice, coaches who subscribe to this training model have noticed that for middle distance runners (400-1500m), the numbers don’t line up. Athletes in this category (unsurprisingly) tend to under-perform at the longer end of the duration spectrum and over-perform at the short end, despite having equal VO2max values to distance runners in the same performance category. For this reason, folks like Daniels (1998) and Martin and Coe (1995) have deduced modified ‘ideal’ performance tables for these athletes due to their ability to contribute anaerobic resources to performance that are independent of VO2max. Unfortunately, with the relative lack of sports science interest in ultra-endurance events, similar calculations have not been made for events in which aerobic lipolytic energy production begins to outweigh the aerobic glycolytic energy production that is largely dependent on physiological qualities like VO2max and Anaerobic (or Functional) Threshold. This is the major oversight that folks who espouse the Functional Threshold model of training fail to ‘get’.

So, let’s get down to the nitty gritty, if we take this lipolytic energy contribution into play, how does it affect the relative performance-duration curve? 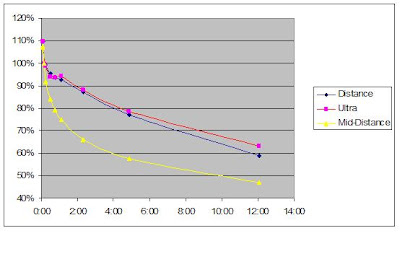 The x axis at the bottom of the chart reflects race duration (in hours). The y axis reflects the % of their vVO2 that the athlete sustains for the event.

The chart indicates that elite Ironman athletes’ race specific pace (and presumably power) is ~5% higher than what would be predicted from the normative curves of shorter distance athletes (on which many training models are based). In specific preparation for an ultra-distance event, this 5% greater endurance is something that should be trained before an effort is made to further elevate the functional threshold or VO2max of the athlete, especially since this adaptation is ultimately more trainable over the long term. Practical example:

Athlete with a PR of a 20:00 5K should be able to hold >70% of their vVO2max after an 8hr big day (~9:10/mi) before any emphasis should be given to speed training to further elevate the VO2max or Functional Threshold.

Keep in mind that the blue line on the chart is indicative of very well trained (although not ‘ultra trained’ distance runners, often running 100mi plus per week). It is likely that the difference between your own ‘blue line’ and ‘red line’ is substantially greater, especially if you have been emphasizing higher intensity training (FT/FT+ training) within your own training program.

It is for this reason that most (though not all) Ironman athletes can vastly benefit from a multi-month period that focuses on building base and raising the % of your vVO2 or max power that you can hold over the race duration.

If, on the other hand, you’re running an IM marathon at or close to 70% of your vVO2, a focus on ‘speedwork’ may be prudent. But first, of course (you know what I'm going to say), you must prove it!
Posted by Alan Couzens at 9:38 AM

alan - thanks. kind of creepy that this post, posted while i was typing my question.

this post will take some time for me to consider... as i'm likely one of these that enjoys just putting in long rides on the bike and could actually benefit from more functional threshold work.

i think Gordo said last year that there is a difference between touring and training... i enjoy touring ... and have to be motivated to compete.

another interesting post. Do you think that the science, and hence the long endurance graphs, just haven't caught up with the fairly recent popularity of long distance endurance events (8+ hours)? Before Ironman came along the marathon was the measurement of endurance (at least for the masses). I think you are ahead of the 'curve' and science will eventually catch up.

There are plenty of very good IMers that started out as 'tourists', Gman included. On the flipside, there are plenty that have come from short-course racing backgrounds.

In the long run, I think one supports the other.

Despite the difference in duration, there is a physiological similarity for events in the 3min - 2hour mark. I think because a lot of the formative triathlon training has been borrowed from the single sports, we have missed the point that training for an 8hr+ event is in a lot of ways completely different to a 2hr event. Having that level of basic speed helps, bit going fast over 8+hrs requires more, as Mark Allen, macca and many others discovered in their initial attempts.

great blog. What protcol do you use for the fuel efficency test? You are too far across the pond for me to visit.

I am willing to trade data if that interests you.

For me, that is that is the value of the weekly tests that Gordo wrote about in his 4 pillar discussion. When you can swim 1:15/ride 6 hrs of steady/run 2:30 within one week, you are close to needing speed work.

I played this year a bit with raising effort and monitoring performance at the end of those sessions. It was a fun and challenging (read disheartening) test.

I think the 20% is a high number for those needing speed work. I would say when you break into the top 100 of an ironman, speed work MAY be useful. And that is still based upon state of your muscular endurance at that time.

Great writing...keep it up. Hope you are healing well and back training.

Thanks for the kind words on the blog.

For the FUEL test we basically use a lactate step protocol while simultaneously performing gas analysis.

Steps are typically 20-25W, with starting stages of 100-150W both dependent on ability.

Good to hear from you, man. Hope life is good in Boise. Looks beautiful based on what I've seen on TV.

Admittedly, a big chunk of my 20% estimate is of the female persuasion - show me a female fit enough to do an Ironman and I'll show you a female who should be doing some speedwork, and then there's Matty Stein :-)

But seriously, when you train an absolute novice up to the point that they are fit enough to complete an Ironman often the speed reserve gets completely exhausted. I have one guy I'm training who is doing regular 7hr rides at 90% of his FTP (for the TSS inclined, this guy is almost accumulating as much stress as a tour rider, which is why I don't put too much faith in TSS scores). All of this is fine if "just finishing" is the goal but if the athlete has long term goals of getting faster, for athletes in this category, spending some time working on this reserve is important to their long term development.

Healing well. Ready to say buh-bye to the trainer :-)