Genetics, determinism and other unpleasantries 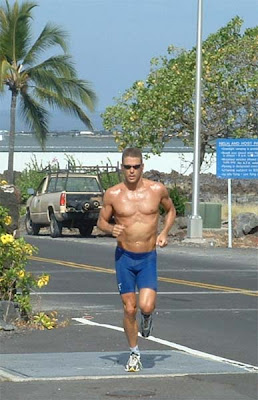 “Top results are available to anyone who builds up to my training and dedication levels (not an easy thing, I accept, but that’s the limiter, not genetics, not training protocol, not athletic background)”
- Gordo Byrn

We had an interesting discussion going on on the EC web site this past week on the tail of some 2009 training volume totals that I posted from some of my guys (with some additions from other EC members). I’ve reposted these below: 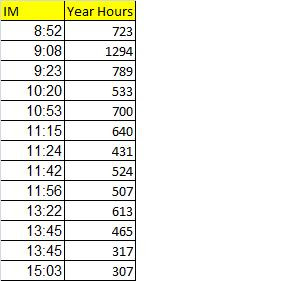 On the whole a pretty strong anecdotal correlation can be observed between training volume and performance. However, a couple of outliers; folks who put in a lot of volume with diminished results and other folks who got great results on minimal volume can be observed. Once again, this brought the aspiring athletes least favorite topic to the fore, i.e. genetics.

So, I thought it would be a good time to throw out a reminder that at least in the world of ultra-endurance athletics you (not your parents) are most responsible for how far up the ladder you choose to climb.

I remember a very heated discussion with a former pro athlete on another tri board a few years back in which the topic of genetics came up. As a confirmed eternal optimist, you can guess which side of the fence I was on. But this guy was beyond vehemently defending his position that the reason that he didn’t make it to the level to which he aspired was all his parent’s fault. What about this study and that study that display the very long time course of training adaptation I would argue, and he would counter with his standard reply – but I tried and I didn’t make it.

Frankly, “I tried and I didn’t make it” is a lousy (and IMHO pretty pathetic) argument. The reality is that any athlete at any one time can only ‘try’ one program and, all that one failure ‘proves’ is failure of that specific program for that specific athlete. The true limiter, in my opinion, is not genetics but mental laziness. Record keeping skills, even at the elite level, particularly in a lifestyle sport like Triathlon, are notoriously poor. I have seen more than one elite athlete (often self-coached) achieve a very high level of performance and have absolutely no clue how they got there (or how to go about reproducing that performance in the following seasons). It brings back memories of the overweight person who would come to me as a personal trainer and tell me that they tried every diet and nothing worked, therefore it must be their thyroid. Really? Show me your food logs!

To complicate matters, unlike collegiate sports like swimming and athletics, in triathlon, the best triathletes rarely have access to the best coaches (whose job it is to keep and analyse these records) because they simply can’t afford them!

My point is not that this guy was going to be the next Mark Allen, had he just ‘trained right’. As you read on, you’ll see that based on the general research, it’s entirely possible that this guy did reach his genetic potential. My point is that he made a conscious decision to jump on a thread and happily adopt the role of ‘dream crusher’ to some poor guy who wanted to discuss athletic potential without any knowledge of the performance curve or training of the guy he was advising and, whatsmore, from the content of his retort, limited knowledge of his own training-performance relationship. For parents, coaches, anyone in a position of authority, do not under-estimate the power of your words. Before joining the ranks of the ‘dream crushers’ seriously consider the information at hand. If you don’t have the information, consider your own motives for wanting to offer an uninformed opinion.

So, disregarding the psychological influence of attribution theory, on what physiological studies are these deterministic beliefs based?

The formative researcher on the influence of genetics on performance is Claude Bouchard. Bouchard’s studies, and those of his fellow researchers have shown the following influences of genetics on various physiological capacities

Initial VO2max
From studies with dizygotic and monozygotic twins, Bouchard concluded that ~40% of the difference in aerobic capacity was genetically based. Follow up studies have confirmed these findings, showing figures of 29-58% (Fagard et al, 1991). Interestingly, the trend seems to be that when true VO2max tests, as opposed to submaximal estimates are used, VO2 is less genetically influenced.

Trainability
After training programs lasting 15-20 weeks in 47 young men, some experienced no change, while other improved by 1L min (all subjects 17-29 males) see below. 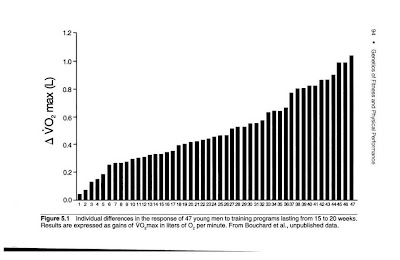 In summary, the vast majority of folks can expect a 0.4-0.6L improvement in VO2max after 15-20 weeks of high intensity training. However, there are outliers who will experience less than 0.2L/min or more than 0.9L/min on the same training program.

I know what you’re thinking, the guys who experienced the least improvement were already fit. Surprisingly, no. Initial VO2max accounted for only 25% of the difference in training response.

Anaerobic Output & Fiber TypeIn a study by Lortie et al. (2001) 10s and 90s max power improved after 15 weeks of interval training with a difference of 5-9x for high vs low responders, an ~40% influence of genetics (Lortie et al. 2001). This can largely be explained by differences in Fast vs. Slow twitch fiber type. Simoneau et al (1995) found that 40% of the difference in fiber type distribution (ST/FTa/FTb) can be attributed to genetics.

Submaximal Work CapacityOnly recently, however, have researchers began to seriously look at the impact of genetics on work capacity below the anaerobic threshold. In a study by Fagard et al. (1999), this question was posed. In the Fagard study, performance at Half Ironman to Ironman heart rates (150bpm) was only 16% attributable to genetics, 11% attributable to body composition, but, the largest chunk of the pie, by far, 34% was attributable to plain old training volume.

************
It is obvious that it is at least somewhat important for the short duration athlete to take care in choosing his parents (or more aptly, choosing a sport and event that matches his parents). Genetic influence in events lasting less than 90mins typically represents ~40% of the performance difference. IOW, if you are not at the top of the genetic pyramid, 40% of a given 5K field could beat you with inferior training. Long course racing on the other hand is different, with, based on the studies to date, only ~16% of performance difference explainable on the basis of genetics.

In other words, even with very poor genetic material, it would not be unrealistic to think that given similar training volume to top age group/pro athletes, the aspirant could make it to the top 16% of the field. Interestingly, in the context of Hawaii, with zero genetic ‘talent’ this represents a 9:55 performance.

Coincidentally, on the EC thread that I mentioned at the start of this piece, Chuckie V commented the following:

"AC,
I'm not entirely sold on the genetic component either, to be honest. I still think anyone who can train 25 hours a week for 25 weeks is capable of cracking 9:30 at an Ironman”

The G-man added the following:

Frankly, it would be unusual for a person with zero genetic talent to stay in the sport long enough to develop aspirations of fulfilling their potential. On some level we all want to be ‘good’ at what we do.

In reality, (IMHO) most of us will fall under the meat of the bell curve: ~9:30 performance given optimal training. Incidentally, but of most practical significance, based on the long term performance curves for the athletes that I have long term data on, the asymptote generally lies in this area of the performance curve.

The real trick, as always, comes back to monitoring your own individual response to different types of training. Only then can you determine just where on the bell curve you fall.

Again, discovering what ‘optimal training’ means to you and fitting it into your life is the real limiter. Most folks are unwilling to do this work. The athlete who is willing will have an advantage that outweighs most of the potential that comes from winning the genetic lottery.

I guess Im thinking long term benefits here. Should I do another Im next year?

If you fit those total training times to a power regression it suggests that ~820 annual hours are required on average to go under 10 hours on race day. That amounts to an enormous 16 hours as an average. Putting together 16 hour weeks isn't a huge challenge when the race is on the horizon and you can point to it on the calendar and say 'I need to put in the time now'. When I don't even own a calendar with the race day on it yet... putting in 16 hour weeks on average over an entire upcoming year is HUGE.

One of the reasons that Bill Sweetenham plans a standard load of 52km/wk for 48wks/yr with his AG athletes. Doesn't sound all that challenging (at least in swimmer terms :-) But consistency over long periods of time is ALWAYS challenging!

Hard to say without 'knowing you' as an athlete.

I will say that I do frequently see athletes who get 'IM obsessed' with very weak functional threshold #'s relative to their endurance. For this reason, I think alternating one short course season with one IM season is a good policy for most.