The Mothership Is Calling! 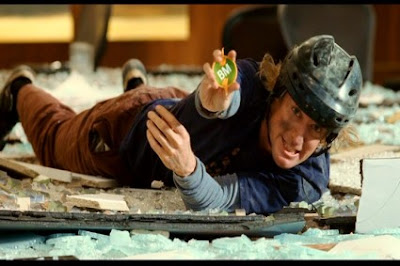 "Have fun, stay liquid, laugh alot but stay ready for the call from the mothership...then we fight. Then you'll see Dupree come in here throwing seven different kinds of smoke"

The last blog that I wrote implied that genetic determinism was an ‘unpleasantry’. I have been thinking about that a lot this past week and have come to the conclusion that the line between genetic determinism and a spiritual calling is a fine one.
Jung, in developing the theory of the collective unconscious coined the notion of biological destiny. The idea, that somewhere, deep within our genes lies the answer to our destiny both as individuals and as a species. Of course, our greatest inner guidance system with respect to our destiny is our passion. Often there is no rhyme or reason to explain the things we are most passionate about. We just are. I can’t explain to my non-athletic friends the joy that comes from a 6hr ride through the mountains. There is just something inside me that determined that that action would elicit great joy.

The other ‘yang’ biological entity that comes into play to affect destiny is ability. Failure is a powerful negative reinforcer that will often, eventually, outweigh passion.

At one point in my life I had dreams of becoming an architect. However, after walking away from my technical drawing class with a less than exemplary grade and the associated feelings of failure, I realized that maybe architecture wasn’t my destiny.

Nope, embracing the true joy of life comes from finding those things that we are most passionate about and are (at least somewhat) inherently good at.

This post will talk about the athletic side of things, because that happens to be my passion but the principles apply equally irrespective of what your personal calling may be.

We all want to be good at what we love. I am assuming that if you are reading this post it is because you have a love of endurance sports. Make no mistake, a love of endurance sports and the process of training therein will take you far in the world of endurance athletics. At some point however, for many of us, love is not enough. Love without ability can lead to frustration. So, this post is about your own personal discovery and determining, from an athletic stance what plans the mother ship has for you.

In the single sports, the concept of talent identification is as old as the hills. For years, in swim squads around the country, gruff old coaches have been making arbitrary distinctions to ferry the little tadpoles in the right direction as they move through the squads, ‘Yep, you’ve got the shoulders of a backstroker’. ‘Yep, you’re a born breaststroker’. In most successful squads, the notion that an athlete should “choose their event” is laughable. Ask any coach worth his weight and he will tell you that the swimmer doesn’t choose the event, the event chooses the swimmer.

This mindset is not confined to the pool. In athletics, a pretty successful guy by the name of Arthur Lydiard made the comment that ‘for middle distance through to marathon, the training is fundamentally the same. The right event for a given runner is not determined by the training but rather their inborn basic speed.’

In recreational sports, however, the decision of what sport to ‘specialize in’ is often made with no particular regard given to the athlete’s biological potential. Rather, the athlete chooses the activity that they most enjoy. This is all fine and dandy until the athlete crosses that hazy ‘no mans land’ between recreational and competitive athletics. When the competitive goals start to come into play: I want to qualify for Kona, I want to win my age group at xyz triathlon.

It is human nature that we want to be good at what we love. For many of us, the ‘what we love’ part is much more plastic that the ‘what we are good at’ part. For instance:

We have an (in-built) love for practicing ENDURANCE ATHLETICS in the great outdoors. We could fufil this love with:
- Running Events (long or short)
- Triathlons (long or short)
- Mountain Biking
- Adventure Racing
- Nordic Skiing
- Road Cycling
- Etc.

Now, of all of these possibilities, you will be more of a ‘natural’ at some than others. This is the flipside of the principle of individuality and athletic potential. For every sport that you absolutely suck at, there is an anti-polar sport that you have the potential to be very good at. The trick is intelligently listening to the ‘mother-ship’ to determine what sport best represents your own athletic destiny.

I explored this concept a little in a previous blog post on individuality and came to a similar conclusion as my last blog on the limitations of genetics, that being that the duration and multi-discplinary nature of Ironman significantly mitigates most of the genetic roadblocks that are common to other endurance sports.
Based on the research and data that we have collected, you should be in and around the following to be in with a realistic shot of reaching the upper echelon of Ironman racing:

• A starting VO2max of 3.8L/min
• Starting lean Muscle Mass of 60kg or more
• Starting bodyfat of <~20% (in accordance with somatotype)

Note: Even these are not requirements, but they represent the sort of long term improvement, the average person can expect with long term training. There will be high and low responders that may begin with notably lower or higher #’s than these benchmarks and still ‘make it’. E.g. the G-man’s weight loss.

Now, for a young athlete this VO2max value represents a percentile rank of ~83%. In other words, there are likely several hundred million young folks walking around out there right now with the physiological potential to climb to the top of Ironman racing. I wonder how many have the passion to devote 10,000 hrs of their life to training?

Put another way, the Mark Allen of tomorrow may be running around at the top of his gym class right now, however, he is by no means necessarily winning Junior Worlds.

But, the other side of that coin is that there are several billion folks who, even if they were to training several thousand hours, are likely to top out in the 9:30 to 10:00 range. What about them?

So, what if you’re the skinny whippet who weighs 100lb sopping wet? There is an event for you too! With a VO2 of even 3.5L/min at 120lbs, your relative values make you a prime candidate for reaching the upper echelons of distance running.

And what if you’re a big guy, a little tubbier than 20% but with the big engine and muscle to boot? A weight supported sport like bike TT/track racing or rowing may be just the ticket.

Now, what if your VO2max just doesn’t cut it? The good news is that the same factors that lead to a less than impressive aerobic capacity lead to a more than impressive anaerobic capacity. Recently there has been a good amount of research into the specific genes that determine aerobic performance. One gene that shows particular promise is the ACE (angiotensin converting enzyme) gene, which has implications on vasoconstriction and subsequent blood volume within working muscles. A double dose of the ACE gene has been correlated with high levels of endurance performance in elite distance runners. On the flipside, the polymorphism which results in a double dose of the deletion allele of the gene results in better than average anaerobic capacity. Interestingly, the incidence of the aerobic polymorphism and the anaerobic polymorphism is ~25%. Therefore, 25% of folks are aerobically apt, 25% are anaerobically apt and 50% have a mix of both abilities. Similar distinctions in glycolytic enzyme activity have been observed by the guru in this area, Claude Bouchard.

I guess the point that I keep coming back to is that, unlike other endurance events, Ironman racing is one of those sports that requires little more than ‘above average’ genetic material and the larger point is that we are all athletically ‘above average’ in some sport.

Listen to the mothership, train with passion, and before you know it, you too will be throwing seven different kinds of smoke! :-)

Thanks for another legendary post! Gotta love the Mothersip quote.

Triathlon selects some because despite being mediocre in individual disciplines, add a bit of hard work and self belief, and hey presto! - you shine.

Couldn't agree more. Ironman definitely favors those with the passion to train long and hard over many years vs the genetically blessed.

Great post Alan - being the best does not always mean "being #1" - we get so caught up in our drive to succeed at the highest level, that even when we reach our goals, we feel disappointment.