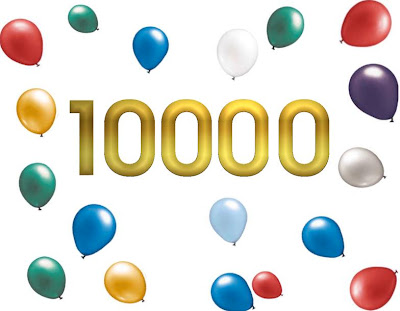 "Life grants nothing to us mortals without hard work"
- Horace

There is a great little brouhaha going on at the moment between The Science of Sport guys & Professor Anders Ericsson, founder of the ’10,000 hour rule’ of elite performance.
http://www.sportsscientists.com/2012/03/10000-hours-vs-training-debate-no.html

The 10,000 hour rule basically states that differences in performance across a broad range of fields can be explained to a very large degree by the amount of hours of deliberate practice that the individual has engaged in and furthermore, that elite performers across many fields have a common denominator of 10,000 hours of this deliberate practice preceding these elite performances.

Unsurprisingly, this point of view has met with criticism from experts in athletic science, experts in those things that differentiate the elite from ‘the rest of us’. Specifically, these days, this tends to mean experts in the relatively young field of genetic research.

I present my own case here from an alternative perspective – from the viewpoint of a science based coach, i.e. of somebody who performs his own very long term ‘experiments’ and quantifiably observes their effects. While not as controlled as the lab work of genetics researchers nor as extensive as the observational studies of humanists like Ericsson, I think the combination of ‘real world’ & science can shed some important light on the discrepancy between the 2 parties. Here’s my take…

1. Genetics plays a role
At this point in the game, with the genetics research that has been conducted to date (I prepared a quick review here http://alancouzens.blogspot.com/2009/01/genetics.html ) it’s pointless to argue that we are all the same when it comes to training response. We are not. Below I’ve presented a chart comparing training chronic load (TSS/d) vs Ironman performance for 15 of the athletes that I coached in 2011. 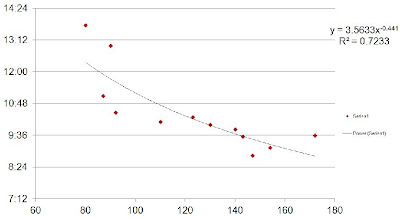 Of course, Ironman performance is not the result of fitness alone. However, even when comparing pure fitness markers (lactate threshold, power:HR etc) some variability in the load:response relationship remained. I expand on this individual variability in training response here http://www.endurancecorner.com/Alan_Couzens/athlete_type

2. Only a handful of people will ever do enough work to discover any genetic ‘limits’.
We are an immediate gratification society. This is reflected in both our athletic practices and our scientific studies. Unfortunately, we tend to place a lot of weight in these studies, even though they are often..
• Ridiculously short when compared to the real world time frame of training
• Not dealing with athletes as subjects
• Subject to methodological flaws that may not be evident to those without a deep understanding of both the intricacies of the experiment & the topic at hand. See http://www.marksdailyapple.com/will-eating-red-meat-kill-you/ for a great example of this as it pertains to the current ‘red meat debate’.

In the context of research on improvements in aerobic fitness, we see..

Most often: Short term studies of 8-16 weeks, often utilizing high intensity training, that show a rapid improvement in VO2max followed by a relative plateau (e.g. Wenger & Bell, 1986, Hickson et al, 1981) leading to the erroneous conclusion that VO2 max is essentially fixed and can only be improved by small amounts.

Less often: Longer term observational studies of non athletes or recreational athletes that are subject to both a non systematic & often inconsistent ‘training programs’ and many of the recall errors mentioned in the Mark’s Daily Apple post referenced above (e.g. Pollock, 1973)

Very rarely (almost never) do we see studies on moderate-large groups of athletes training systematically over an extended period of time. For this reason, I believe my data set is unique and valuable to this question.

Elite athletics is a multi-year proposition: My experience would agree with Bouchard’s research that, for the ‘average responder’ initial improvements in VO2max are in the vicinity of 0.5L/min per 15-20 weeks of training (1L/min over a 40 week mono-cycle). For the exceptionally high responder, this may be elevated (0.9L) and for the exceptionally low, 0.2L.

This, like all physiological qualities follows a pattern of diminishing returns from year to year. Based on my experience, we may expect only ~60% of this initial improvement in year 2, a further 60% of this in year 3 etc.

Considering world class endurance athletes of average size will have VO2max values of approx 5.5L/min. & most folks ‘on the couch’ VO2max is ~3L/min, A transformation from 3 to 5.5, even for the most gifted would be the product of multiple, uninterrupted, progressively overloaded, intelligently constructed seasons.

Speaking from my own data (presented below), while ‘natural’ athletes may achieve those World Class VO2max values on an accumulated volume of 2500hrs, & 'average' athletes may take 7500, genetics alone is not a precluding factor. There are plenty of instances (both in history and my own brain box) of athletes of seemingly average starting 'genetic material' (i.e. only average aptitude for endurance sports in their youth) going on to compete at a world class level. It is possible to outwork the 'gifted'. 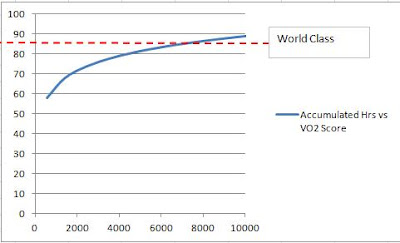 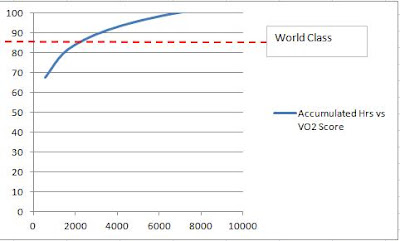 Furthermore, there seems to be an inverse relationship between athletic ‘talent’ and work capacity, i.e. the athletes who need the most work often fall into the 'workhorse category' - they tend to have stronger constitutions and seem more physiologically able to handle the work providing they are motivated to do so!

So, while, over the short term, genetic differences may be obvious (& frustrating), over the long term, their eventual impact on performance pales when compared to the inverse of the qualities outlined above, i.e.
- Is the athlete consistently building their training load from year to year over multiple seasons?
- Is the athlete subject to interruptions in the load whether through boredom/ lack of focus, recurrent illness, injury or excessively frequent competition?
- Is the volume being progressively increased, so that the athlete is using their increased fitness base to do more work and so on and so forth?
- Related to the above, is the load intelligently constructed & appropriately timed towards a peak or is it ad-hoc?

Athletes who are able to put together the above over a multi-year time frame are significantly more rare than the genetically gifted that we devote so much envy towards. These are the athletes that excite me most as a coach!

In conclusion, I would suggest that there are certainly genetically gifted athletes who become ‘good’ on relatively meager amounts of training. However, among the world class, the best of the best, multiple years of high volume training are a common thread. Whether this amounts to 3,000 hours for the genetically blessed or closer to 10,000 hours for the less so, is kind of irrelevant. Both numbers essentially represent spending the better part of a decade of your life devoted to only one purpose. This is the greatest limiter of all.
Posted by Alan Couzens at 10:11 AM

How exactly does one tell if they've reached their "genetic limits"?

I think a few factors would have to come together before I came to that conclusion.

* Has the athlete reached their true chronic 'breakpoint volume', i.e. have they been stuck at the same training load for multiple years WITHOUT being limited by non-training factors?

* Have we exhausted the various permutations for the TYPE of training, i.e. have we addressed all physiological weakpoints with respect to the athlete's event?

The commitment required to honestly answer the 2 questions above is what makes genetics, in practice, a non limiter.