Why I'm a fan of Road Cycling 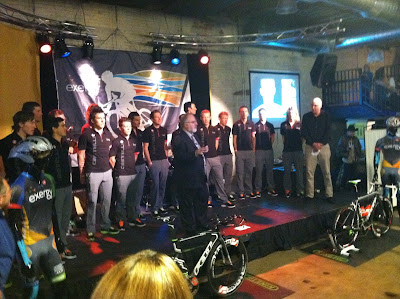 The topic of the presentation was “the physiology of road cycling” and the subject matter was reflected right back at me as I stood in front of a group of athletes who were about as diverse as a group of endurance athletes gets, from short, relatively stocky powerhouses to lithe climbers to larger ‘diesel engines’, the diversity in front of me represented an exercise physiologists dream, with clear examples of strengths across an incredibly broad range of physiological capacities. In chatting with the guys, this was further confirmed. The ‘sample’ contained
· Guys with VO2 max values greater than 5L/min
· Guys with relative VO2max values >70ml/kg
· Guys with peak anaerobic power outputs in excess
of 20W/kg

But, as a fan of the sport, more impressive to me than the raw physiological ingredients of this group of athletes is the way that these qualities come together in the course of a dynamic living breathing cycling race, with athletes using their unique abilities in support roles in some instances to augment the strength of their team mates, e.g, the diesel engine using his size and sustainable power output to enable his sprinter to save those few precious watts in the draft that he can put to good use in the last 200m. Or, in other circumstances being able to individually exploit these strengths e.g. in the 'race of truth' - the time trial. Cycling is a true team sport that demands both a team with a unique and diverse range of individual super-human abilities coupled with the humility to know when to use them for the greater good. In short, at the highest level it attracts a group of folks that is both physiologically very special while humble enough to know that without the context of the team these abilities mean naught.

As an exercise physiologist & self confirmed 'data geek', the thing that excites me most about road cycling is that it is a sport on the cusp of a revolution. It is a sport that has taken ‘blue collar’ traditions to the max and is just now beginning to (tentatively) embrace science and technology. This becomes more obvious to me as I chat with the ‘new generation’ of cyclists – guys who know their CDA values & lab numbers by heart, guys who speak fluent WKO+. While triathlon sometimes seems to look at technology as an alternative to full and complete dedication or a ‘short cut’ of sorts, it is entering cycling at a time when the traditions for work have been observed and maximized over the course of decades. This excites me greatly as I see the huge potential for growth, for working both hard AND smart.

As a young, developing team, Exergy is at the forefront of this revolution and I look forward to assisting some of the guys in incorporating science and technology to best effect while watching the evolution of the sport from the front row. First and foremost, I’m a fan!

Thanks to Dr. Jeff Shilt & family for setting it up and hosting me & to Team Exergy for their genuinely warm reception. Here’s to a great 2012 season!
Posted by Alan Couzens at 8:54 AM