The 'double whammy' of missed workouts

It’s that point in the year where all the races are done, the spreaadsheets are full of data & lessons are ready to be learned.


One of the most striking comparisons that I look at each year is the “planned v actual” comparison, i.e. how did the actual training pan out when compared to the initial plan? Without exception, even among the most dedicated athletes, actual NEVER matches planned. After all, we’re dealing with human beings here operating within that fuzzy medium that we call life. This fact speaks to the pointlessness of buying and attempting to follow a long term plan. A good coaching plan, in contrast, won’t be a ‘pretty’ list of numbers and workouts over a long period of time but rather will be full of red marks and rewrites as the plan is adjusted in accordance with reality. Small changes in day to day execution can and should amount to large changes over the course of the long term plan.


You  put in ‘$100’ worth of training load. Not only do you get a small return from that investment that you can ‘spend’ on a performance but you also get a return that you can re-invest in harder training leading to higher performance gains in the future.  On the flipside, if you miss your deposit for a given day and your buddy doesn’t, not only is he a smidge fitter after that workout but the tiny extra bit of base that he has invested can be applied to the next workout, which he’ll be able to complete at a slightly higher level than you & widen the gap a little more, and the workout after that where he’ll widen it a little further and before you know it 2 guys who started at exactly the same point are miles apart in their performance level.


So, quantitatively, what’s the impact of missing a workout every now and again?


I have a 90% rule that I follow when assessing adherence to workouts. In other words, if an athlete is completing 90% of planned load, we’re on track. If less than 90%, we’re failing. Why 90%? I don’t know. It’s a pretty arbitrary cut off that attempts to take into account the realities of the gap between planned v actual training load on a given day. In other words, if I plan a 100TSS 2 hour workout and the athlete hits a few extra stop lights or has to noodle through some road work & only gets 90TSS for that day, I don’t want to call that a failed workout. Similarly he might be a little tired. That’s OK. If he’s a lot tired, I want it to register as a red flag.


I modeled out the end of year difference in terms of VO2 Score (http://www.endurancecorner.com/Alan_Couzens/benchmarking)  for an athlete with typical training response (F=0.23, B=34) & tolerance to load (TSBF=-20) using the default constants of 42/7 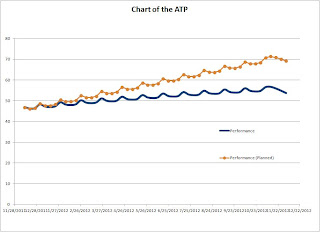 Both athletes start at the same point but Athlete A hits all workouts & is consequently able to accrue a lot more training load over the course of the year (44,000 vs 29,000 TSS) despite starting at the same level of fitness with the same physical tolerance to load. Athlete B hits 90% of planned workouts throughout the year – in relative terms, a good number, but the impact on performance is obvious. Athlete B hits a peak VO2 score of 57 (a midpack number), while athlete A hits 71 (an absolute front of pack amateur number worthy of ~9:00 on a flat course!)


I present the above in the hope that this visibility will inspire you to raise your standards as we go into the 2013 training year. Small changes can have a surprisingly large impact.
Train Smart,