Last week I wrote a piece on common taper mistakes for the Endurance Corner website (http://www.endurancecorner.com/Alan_Couzens/race_week_taper). The piece spawned some great discussion on our EC forum that prompted me to go into a little more depth on both the practicalities of an optimal taper and the rationale behind it in this follow up article.
When tapering, an athlete is looking to exploit a key principle of exercise physiology – that fitness decays more slowly than fatigue. If we consider performance to be the sum of these 2 components, this leads us to a ‘sweetspot’ when, after a period of reduced training, fitness remains relatively high while fatigue is very low & performance is maximized. An example of this is illustrated below. 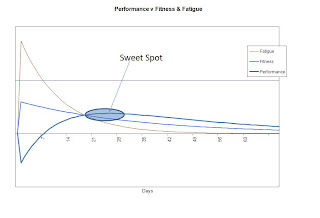 I suggested in the article that this sweetspot is a function of:
·         Fitness – Fitter athletes need shorter tapers.


However, when getting down to the nitty gritty of planning the contents of the taper, there are other factors that need to be considered. The first of these is….
Content of the taper weeks by sport.
To complicate matters of optimal tapering, each sport (swim, bike, run) exhibits different rates of decay for fitness and fatigue, leading to different ‘sweetspots’ for each sport.
1.    Some time ago, I wrote a piece on using ‘influence curves’ to frame the importance of load through the season (http://alancouzens.blogspot.com/2009/12/influence-curves.html
). We can apply this same concept to the taper to ascertain the relative benefit of a given swim, bike or run load at various points though the taper.
Using data from mathematical modelling studies on the various sports (Busso et al., 1991, 1993, 1997, Hellard et al., 2005, Morton et al., 1990, Millet et al., 2001, Mujika et al., 1996), I have averaged the fitness and fatigue constants from each study to produce the following SBR influence curves.
It should be noted that these studies represent all levels of athlete from untrained to the very elite, so, as mentioned above, the actual SBR patterns will also be a function of fitness. But, speaking generally, the figure below represents the typical influence curves for swim, bike & run -  the curve of maximal impact of load on performance vs time from performance date. 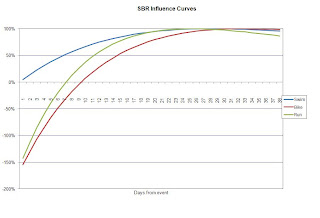 Looking at the curves, the following general conclusions on the content of taper weeks by sport can be drawn.


·         The impact of load on performance is maximized for all sports at a period of approximately 28-35 days from the competition date. In other words, for most athletes, the 5th week out should be a big week.


·         In the 4th week from competition (days 21-28), the influence of cycling load on performance tends to drop off more quickly than the other 2 sports. In practical terms, you may want to apply this by making the 5th week out cycling focused (i.e. a bike camp) & 4th week out (while still relatively big) more SBR balanced.


·         In the 3rd week out from competition (days 14-21)the influence of cycling and running load (while still generally positive), tend to fall at similar rates. This leads to 2 key ‘take aways’ for this week:


2.       If in doubt, leave it out – Load is starting to trend towards negative at this point & for larger or less fit athletes, may be approaching negative, so if a session feels tired, this is the week where more rest may begin to trump more fitness.
·         In the 2nd week out (days 7-14), bike and run load trends quickly towards negative. Almost all athletes should be dropping load quickly at this point, from bike and especially from run.  Swim load will also start to drop but should remain relatively high (50-75% of peak)


·         In race week (0-7 days from the event), both bike and run load will generally have a negative impact on performance. At the extreme, you may take this to mean (with the exception of a couple of trips to the pool) that you should spend the time with your feet up in your hotel room, however, this is a mistake as, when we drill down a little deeper to the training and detraining rates of the various physiological qualities, you’ll see  that there is one in particular that the Ironman athlete wants to stay in touch with during race week. I’ll look at this question of  content of taper weeks by intensity level in my next article on tapering.


Until then, train smart.